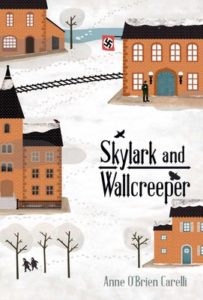 When waters from Hurricane Sandy flood the nursing home in Queens where Lily’s Grandma Collette lives, residents are evacuated to a shelter in Brooklyn. Collette insists that Lily save a small box that she later finds holds a pen. When Lily loses the pen, she goes on an unexpected journey to recover it and discovers stories about her grandmother’s life growing up as part of the Resistance in Nazi-occupied France.

Skylark and Wallcreeper by Anne O’Brien Carelli showcases the importance of family and friendship while shedding light on two historical events: life in southern France during World War II and the hardships suffered during Hurricane Sandy in 2012.

Collette is 12 years old when she decides she has to do something to help her countrymen defeat the occupying Germans. Along with her friend Marguerite, she takes on roles of messenger, spy, and saboteur. There is always danger that the two will be exposed and suffer dire consequences.

Decades later Collette’s granddaughter, who is 12 during the hurricane, proves to be courageous and daring, as well. While not fighting an enemy army, she does have to battle the elements and put herself at risk to make sure her beloved grandma stays safe.

Skylark and Wallcreeper is an adventurous tale that show young people fighting for what they believe in, forging friendships and strengthening family relationships. I recommend it for readers aged 9 to 12.