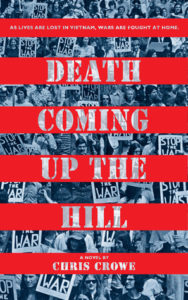 Chris Crowe’s novel, Death Coming Up the Hill, brings the turbulent events of 1968 alive for readers as seen through the eyes of Ashe, a high school senior. The story is told in haiku, one chapter for each week of the year. Ashe defines the concept at the start:

that leaves craters of

meaning between the lines but

what matters most. I

don’t have the time or the space

to write more, so I’ll

write what needs to be

remembered and leave it to

you to fill in the

one syllable to each soul

as I record my

The opening sets the stage for the turmoil to come. Ashe’s father is a racist, his mother a peace activist who attends war protests. Ashe debates whether he should enlist in the armed forces after he graduates high school, like so many of his classmates plan to do. He gets through the assassinations of Martin Luther King, Jr. and Robert F. Kennedy.

Week by week, haiku by haiku, he captures the uncertainties of the times and their impact on everyone he knows. Crowe’s choice of haiku to tell this story has a profound impact, because it strips away unnecessary language and focuses on the most important occurrences for Ashe and the people he knows.

Death Coming Up the Hill is a haunting tale likely to leave a lasting impression. I recommend it for readers aged 14 and up.