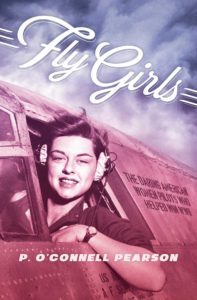 During World War II, people all over the U.S. were asked to pitch in to help the war effort. For women especially, this meant they got to do jobs they would not have been otherwise allowed to do. One of those jobs was flying military aircraft. In the 1940s, women had a hard time being accepted as pilots at all, much less in a military setting.

Fly Girls: The Daring American Women Pilots Who Helped Win WWII by P. O’Connell Pearson tells the incredible story of the some of these women. Despite facing discrimination on bases, they bravely flew planes while being shot at, so they could help soldiers gain skill at shooting planes down. They ferried planes from factories where they were built to bases where they would be used, freeing up men to serve in combat, where women weren’t allowed.

Every step they gained had to be fought for, as many in the military thought women should not be allowed to fly planes at all. They even faced sabotage on some bases where they worked. Also, it took decades and an act of Congress for the women pilots to be recognized for the work they had done.

Fly Girls is a fascinating look at the personal stories of the women who defied accepted gender roles and refused to be grounded when they knew they could help. Historic photos, sidebars with info about events happening elsewhere with war efforts, and quotes from the women and others bring the story of this chapter in history to life. I recommend it for mother-daughter book clubs and readers aged 9 to 16.