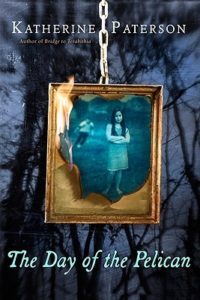 Meli and her family are Albanians living in Kosovo in the 1990s when tensions are high between Kosovars and Serbs. The tensions eventually erupt into violence, with families displaced, people disappearing, and houses ruined. Meli and her family must flee, eventually ending up in a refugee camp on the border. Eventually they make their way to the U.S., where they find peace. That is, until two planes fly into the World Trade Center Towers in New York.

The Day of the Pelican by Katherine Paterson unveils a region in struggle and the human desire to live in safety among family and friends. The history of Kosovo is complicated, and for the most part people of all ethnicities live peacefully next to each other. Yet some would like to cleanse the area of Albanians, either by killing them or forcing them to leave.

When Meli and her family relocate to they U.S., they are just starting to feel safe when the events of 9/11 catch them in a wave of anti-Muslim sentiment. Their determination to face their own fears and peacefully confront the fears of others leads them through the tough times.

The heartfelt story emphasizes that when judgments are made against all people of a race or religion based on the actions of a few, they are flawed. It is only when people are seen as individuals that we can move past stereotypes of all kinds and connect on a human level.