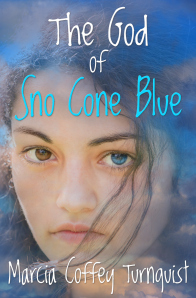 When Grace thinks back on her childhood, she sees it split into two: the time before her mother got sick and died, and the time after, when the letters her mother wrote to her started to arrive. Before, even though she was the child of a preacher and felt the pressure of being considered a “goody two shoes,” Grace felt like she knew what to expect of the world. After, her mother’s letters reveal stories from her own teen years and the events that set her on a path to become a preacher’s wife. The letters reveal things Grace never expected to know about her mother, information that sends her on a journey of discovery that will change the rest of her life.

The God of Sno Cone Blue by Marcia Coffey Turnquist is a story of mothers and daughters and the profound impact they can have—both good and bad—on each other’s lives. Grace’s mother, Sharon, tells stories of her own mother, a woman with no tenderness to show her children. Astrid is a mother to be feared rather than loved, and Sharon vows to be different. Dying young, she wants her daughter to truly know her, so she writes the letters and directs that they be delivered over time, as Grace turns from a pre-teen to a teen.

The God of Sno Cone Blue brings up many issues to discuss in book clubs with teens aged older than 15 or those with adults only. Why does grief often make people question their religious faith? How does knowing someone with physical or mental challenges change peoples’ perspective of others who are challenged? How important is the image we create of ourselves and the person we believe ourselves to be? What defines a family?

I purchased my copy of this book from the author.