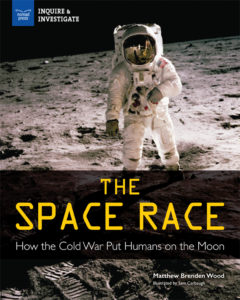 With space travel becoming more common and private companies promising to one day send tourists into orbit, it’s easy to assume that travel to the moon and beyond was a goal much supported by Americans. But the drive to launch humans beyond Earth’s atmosphere wasn’t always supported. The story of what fueled the endeavor is told in The Space Race: How the Cold War Put Humans on the Moon by Matthew Brenden Wood.

Part of the Inquire and Investigate series, The Space Race links the political competition between the United States and the Soviet Union as the main drive for sending humans off the earth. Each wanted to be seen as having the most advanced technology. Each wanted to send a message to the other that superiority in space meant superiority among nations on Earth. The Space Race expertly takes readers on a fascinating journey from the early origins of space travel through its experimental accomplishments and failures to the current-day achievements. A timeline of events at the front and a glossary of words and terms at the back are good reference tools. “Blast Facts” and other sidebars add interesting details to the main text, which offers many suggestions for further research to help young readers learn more. The history also provides insight into relations between the U.S. and the Soviet Union that informs our current relationship with Russia.

The Space Race is a great text for budding young scientists aged 12 and up or anyone interested in the history of the space program and where it stands today.