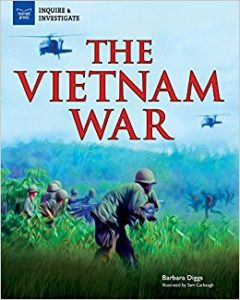 The involvement of U.S. military in Vietnam is a complicated story that took place during a complicated time. American presidents, their advisors, and the military escalated involvement even after they believed they could not win, for reasons related more to outside forces than the actual conflict.

The Vietnam War by Barbara Diggs, a title in the Inquire and Investigate series, looks closely at the history of Vietnam and what happened there in the decades after World War II. Explaining the history without bias is a huge task, yet Diggs meets the challenge by looking at multiple points of view from both sides of the conflict.

As with other titles in the series, The Vietnam War presents many opportunities to grasp difficult concepts and encourages young readers to do their own research. It uses graphic panels, sidebar topics, “strategy facts,” photos, and other features to make the narrative easier to process and understand.

I kept referring back to a helpful timeline in the front of the book to remind myself of when specific events occurred in the overall picture of Vietnam’s history. I also believe the glossary at the end can be quite helpful for young readers unfamiliar with words and terms commonly used at the time.

I highly recommend The Vietnam War for anyone aged 12 and up wanting to know more about that conflict and its impact on the U.S. both then and now.