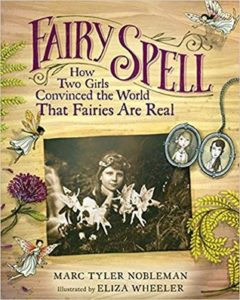 In 1917 two girls in Cottingley, England convinced the world that fairies lived at the creek on their property. They even took photos to prove they were telling the truth. Experts examined the photos and declared them to be real, and the story they told lived on for decades, eventually even being made into a film.

Marc Tyler Nobleman’s book, Fairy Spell: How Two Girls Convinced the World That Fairies Are Real is fascinating both for the glimpse it provides into a time when many people thought fairies existed and for it’s “story behind the story” told about this moment in history.

I was particularly struck that one of the girl’s mothers brought the story to the world’s attention after approaching a speaker at a presentation on fairies. It’s difficult to imagine that a well respected speaker would talk to an audience of adults in today’s world about the possibility that fairies are real. It’s easy to see that in an environment where fairies are possible, providing “evidence” can convince even skeptics. Even Sir Arthur Conan Doyle, the author of the Sherlock Holmes mysteries, believed the girls spoke the truth.

The girls didn’t tell the truth about what happened until they became old, and even then one of them continued to say she really did see fairies, adding to the mystery.

Eliza Wheeler’s illustrations include rich details and are evocative of the time period the story took place. Also, the girls’ photos and other historical documents let readers get a feel for the debate that went on. It’s a fascinating story that will likely capture the imaginations of young children and adults alike. I also recommend the movie, FairyTale: A True Story (1997), on the same topic.