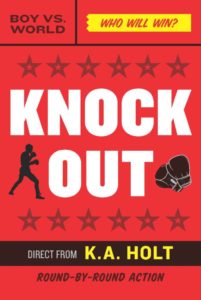 Levi wants to be just like anybody else, but sometimes he can’t breathe well, and lately it’s been getting worse. His mom and older brother hover over him, wanting to keep him safe. His dad tells him to toughen up, go out for a sport. He chooses boxing, liking the way he gets to feel strong while he hits a punching bag and the way he can strategize in the ring. But ignoring his health issues won’t make them go away. Instead, if he wants the chance to follow his dreams Levi must be honest with himself and those he loves.

Knock Out by K. A. Holt explores what happens in a family when a child is sick and everyone else adjusts to what he needs. Levi’s parents are divorced and his older brother looks after him like a dad would. His mom works hard to afford Levi’s health expenses. Levi appreciates what they do, but he also wants to explore his limitations. He’s also feeling left out as his best friend, a girl named Tam, becomes friends with another girl in school. Boxing lets him feel powerful and in control, something he otherwise doesn’t get much from life.

Told in free verse and shaped poetry, Knock Out will resonate with anyone wanting to break the image of the person they’ve always been and let out the person they feel they are inside.