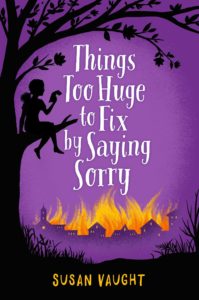 Dani’s Grandma Beans always told her, “Sooner or later, we’re all gonna be okay.” But Dani wonders how that could possibly be true. Her best friend told her he’s not allowed to be friends with her anymore and her grandma slips away with dementia more and more each day. But when Grandma Beans tells Dani to find the papers, to get the key and open the box, Dani starts to unravel a mystery that concerns an old friendship gone bad and how it relates to the history of civil rights in Oxford, Mississippi.

Things Too Huge to Fix by Saying Sorry by Susan Vaught is a rich and complicated novel that addresses several issues of historical and contemporary importance. It’s aimed at young readers aged 9 to 12, but teens and adults will find just as much to appreciate in the story.

Dani, who is 12, has a white mother and an African American father. Her Grandma Beans is her dad’s mother, and she lived through the tumultuous events aimed at desegregating Mississippi in the 1960s. As Dani uncovers the segregated history of the town she lives in, she sees the vast differences between that time and the present. In current times, she feels no threat from being biracial. But she recognizes that many people struggled for years to make conditions change. And some of them paid a steep price to help that change happen.

Issues addressed include the value of friendship and actions that may destroy even the best of friendships, slavery and the Civil War, the Meredith riots in Oxford that occurred when James Meredith became the first black student to enroll at Ole Miss, aging grandparents and dementia, family secrets and more.

Even with an abundance of meaty issues to encourage thought and discussion, Things Too Huge to Fix by Saying Sorry doesn’t stray into preaching to get its messages across. Instead it stays true to telling the honest story of a 12-year-old girl concerned about her family, her friends, and her place in the world. I highly recommend it for mother-daughter book clubs with girls aged 9 and up.