Today I’m taking part in a blog tour for Stacy DeKeyser and her book, One Witch at a Time, the sequel to The Brixen Witch, which received two starred reviews and was a Chicago Public Library Best of the Best Pick.

As a stop on the tour, Mother Daughter Book Club has a set of books to give away to a reader with a U.S. address: The Brixen Witch in paperback and One Witch at a Time in hardcover. Please note: the giveaway is closed. Congratulations to Mary on winning.

DeKeyser is also the author of the young adult novel, Jump the Cracks and two nonfiction books for young reader. She lives in Connecticut with her family. To learn more and to download a free, CCSS-aligned discussion guide for One Witch at a Time, visit StacyDeKeyser.com.

Read on to hear what DeKeyer thinks makes a good story and how those stories can have an affect on young readers. Check back tomorrow for my review of One Witch at a Time. And don’t forget to comment for a chance to win these great books for young readers.

What’s the Story REALLY About? 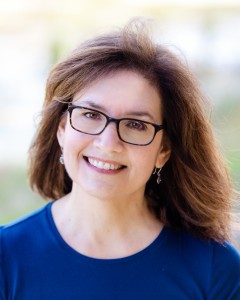 What makes a good story? An exciting plot? Characters you care about? A satisfying ending?

Of course, all those things (and a whole bunch more) are important to making a book memorable and worth passing along to friends. As a writer, I love stories that operate on two levels at the same time. Call them the external story and the internal story.

The external story is pretty obvious, right? It’s the action on the page. It’s where the magic happens (literally, in some books!). In One Witch at a Time, the external story can be summed up like this:

“A kid named Rudi joins forces with his new friend Agatha to return magic beans to a vindictive neighboring witch, before the foreign magic causes trouble at home in Brixen.”

And then there’s the internal story.

“A kid named Rudi commits some innocent but serious errors in judgment, and sets out to repair the consequences of those errors so that he can redeem himself.”

And when you care about the characters, you can more easily put yourself in their shoes. So that reading about the imaginary troubles of two kids in a fantasy world can equip a 21st-century kid to deal with his or her own internal struggles.

A kid today may never have to deal with witches, giants, or magic beanstalks. (Let’s hope not, anyway.) But she WILL make errors in judgment from time to time. We all do. And if that kid reads or hears enough stories, she might remember that kid in some book, who messed up pretty badly, but still managed to redeem himself. And she might think: “If Rudi refused to be defined by his mistakes but instead by his honesty, resourcefulness, and courage in owning up to them and rising above them, then maybe I can, too.”

That’s what a good story is really about.