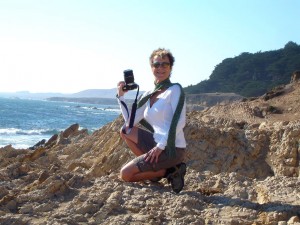 Recently I reviewed a book for young adults called Skin and Bones by Sherry Shahan. The book tackles the issue of anorexia and other eating disorders through the eyes of a teen guy, who is undergoing treatment. Sherry agreed to answer a few questions for Mother Daughter Book Club. com about her writing and her book, and I know you’ll be interested in what she has to say.

Sherry graduated with an MFA in Writing for Children and Young Adults from the Vermont College of Fine Arts and teachers a yearly writers course for UCLA Extension. She has nearly 40 children’s books to her credit, both fiction and nonfiction.

As a travel writer, she’s ridden horseback with zebras in Kenya, snorkeled with penguins in the Galapagos, and hiked a leech-infested rain forest in Australia.

How did you decide you wanted to be a writer?

SS: When my two daughters were young I was fortunate to be a stay-at-home mom. I began tinkering with articles for a local newspaper. It was more of a hobby than a career choice—something to keep my brain from turning into strained carrots. I later tried longer forms: magazines and newspaper articles, short stories, essays, etc. Moving back and forth from short nonfiction (younger readers) to novels keeps me inspired. I’m never bored.

What do you like most about writing books for teens?

SS: When writing for teens I feel like I’m in a conversation with another adult—that we’re in a safe environment where we can discuss serious issues (‘war’ in Purple Daze, and body image in Skin and Bones). I love visiting high schools and hearing about the challenges teens have in their highly charged emotional worlds.

Why did you decide to write about eating disorders and the teens who are struggling with them in your book Skin and Bones?

SS: Skin and Bones grew from a short story I wrote several years ago. Then titled “Iris and Jim,” it sold quickly to a major literary journal. Later, a London publisher included it in their YA anthology, and later in their Best of collection. In total the story has appeared eight times worldwide. My agent encouraged me to expand it into a novel.

Reading about a guy struggling with anorexia is unusual. Why did you want to show readers that perspective?

SS: Anorexia and bulimia are often considered a ‘girl’s disease.’ So I wanted to delve into the psychological mindset from a different point of view. According to The Alliance for Eating Disorders Awareness, this disorder affects approx. 25 million Americans, in which 25% are male. Interestingly enough, when visiting schools, teachers and librarians frequently mention knowing male students with anorexia.

What was most challenging about writing Skin and Bones?

SS: More than one anorexic in my story figures out how to beat the health care system. They’re experts at manipulating family, friends, and their environment. Yet I worried about Skin and Bones becoming a how-to manual for those still in the throes of the disorder. On the other hand, I wanted to include information about the potentially grave consequences associated with the illness. But I feared sounding didactic. Sometimes I sprinkled facts into farcical scenes. Other times statistics emerged in dialogue between ranting patients. Either way, disseminating information felt more organic when slipped in sideways.

The teens in Skin and Bones live in a center that treats eating disorders of all kinds. Tell us a little about why you chose that location instead of say, someone living at home dealing with the same issues.

SS: The first part of your question is the answer. I wanted to explore all types of eating disorders. What triggered them in the first place?  How each individual person dealt with problems. I needed to create an environment where people with varied backgrounds and emotional struggles could work together to resolve some of their issues.

What kind of research did you have to conduct before you started to write?

SS: For Skin and Bones I read memoirs written by males and females with all types of addictions. I noticed certain commonalities. Self-centeredness, for instance, and refined skills of manipulation. Guilt, which often spirals into self-loathing, tends to feed the vicious circle. I spent countless hours online scouring medical sites about the long-term effects of eating disorders, both physical and emotional. I was astounded to read about one young girl who became so thin that her body began producing ‘fur’ to keep her warm.

SS: I empathize with those who continue to struggle with this serious illness. Thankfully, treatment is available throughout the country. The Association of Anorexia Nervosa and Associated Disorders (ANAD) lists eating disorder support groups by state. A free brochure “How to Help a Friend” is available to download. ANAD website: www.anad.org. Email: anadhelp@anad.org. Helpline: 630-577-1330.