Sherry Shahan is the author of many works of both fiction and nonfiction, including Purple Daze, a young adult book that looks at the Vietnam War and other events of the ’60s through verse, letters, journal entries and news stories (see my review).

Recently, I was able to ask Shahan a few questions about her writing life and Purple Daze. Here’s what she had to say.

How did you get started as a writer?

SS: It began more as a hobby than anything. Something I could do at home with my two young daughters so my brain wouldn’t turn into strained carrots. My name first appeared on the “Letters to the Editor” page of the L.A. Times. I was hooked! From there I wrote short articles for local newspapers. I never thought I’d write a novel. Novels are long!

You’ve written both fiction and nonfiction, do you have a preference for writing one or the other?

SS: Fiction, nonfiction, picture book or novel—I approach each project on its own ground. My adventure novel Death Mountain was inspired by a personal experience. While attempting to hike up Mt. Whitney my backpacking party got caught in a deadly electrical storm. The pack mule and horse were struck by lightning and killed. When I decided to turn the experience into a novel, I studied the geological history of the area, plus the animal and plant life.

What matters most is that I have a passion for the topic, whether it’s fiction or nonfiction. Most books take years to write. You have to be totally in love with the topic to invest that kind of time.

What did you know about the war in Vietnam before you wrote Purple Daze?

SS: I’d read lots of books about the war before I thought about writing Purple Daze. The Things They Carried by Tim O’Brien stands out. Plus I had an ongoing correspondence with my friend Bill, who was in Vietnam during the sixties. He was brutally honest about what was happening there. That was quite an education.

Did you gain a new perspective on it after you researched it and talked to some vets?

SS: From the many vets I interviewed I gleaned intimate details not found in secondary sources. One guy told me he put a condom over the muzzle of his rifle to help keep out steel-rusting moisture. Yet he could shoot through it. Another guy told me it was common to remove tobacco from packs of cigarettes and replace it with marijuana. I knew those details would go in the book.

I’m still horrified at how our vets were treated when they came home. Too many mentioned being spit on and called ‘baby killer.’ One guy said it was 30 years before anyone thanked him for serving in Vietnam. That’s so sad.

The end of high school usually brings a change in life for most people. Do you think that change was intensified in the 1960s?

SS: Everything was intensified in the 1960s. Our cars were big and loud. Our transistor radios were loud. (No earbuds.) It was a time of great experimentation. People of all ages were investigating non-traditional lifestyles—living out of the back of a VW bus or sharing space in a commune.

Music was a powerful reflection of our shift in attitudes. The Times They Are-a Changing (Dylan, 1964) comes to mind, and People Got to be Free (Rascals, 1968).

SS: People often ask me if the character Cheryl is really me in disguise. My parents still live in the same house I grew up in. There are small holes outside my bedroom door from a hook-and-eye. That was my mom’s attempt to keep me from sneaking out at night. Like the character Cheryl, I simply crawled out the window.

In one scene in the book, Cheryl and Ziggy are piercing each other’s ears. They’re using frozen potatoes to numb them, sort of like an earlobe sandwich. The Animals are wailing, “We Gotta Get Out of This Place.”

And just like Cheryl, I really did shave between my eyebrows. I wasn’t allowed to pluck!

I look forward to answering any questions your book club members may have. Email: kidbooks@thegrid.net

Here are a few photos Shahan has shared that are relevent to Purple Daze. 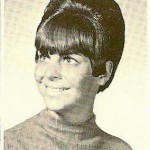 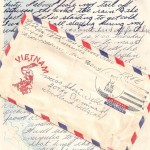 Letter from Sherry’s friend in Vietnam to her 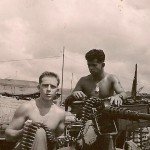