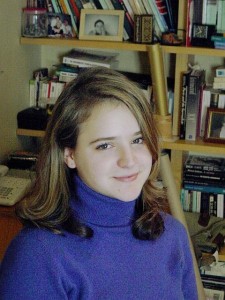 Zlata Filipovic’s diary of life in war-torn Sarajevo has been compared to the Diary of Anne Frank. Only 11 years old when she started writing, she is now a poised young woman of 26 who uses her voice to speak against the tragedy of war and its effect on children. Here she speaks to Mother Daughter Book Club.com about her war-time experiences and her new book Stolen Voices, a collection of young people’s war-time diary entries. (Interview from March 2007.)

How long had your family lived in Sarajevo before the war started?

ZF: My father’s family has been in Sarajevo for generations, all of them also being boys and lawyers on the Filipovic side. Both my mother and father were born there, and I was born in Sarajevo in December 1980, which means I spent eleven very happy years before the war started in April 1992.

Why did you start writing in a diary?

ZF: I started writing a diary because I got a very pretty notebook, and I saw some older girlfriends keep diaries and wanted to emulate them in that way. I had also read the Diary of Anne Frank as well as the fictional Diary of Adrian Mole (written by Sue Townsend) and became familiar with the diary-writing form which I liked. I was hoping my diary would be more like that of Adrian Mole, which was extremely funny, but it ended unfortunately being compared to that of Anne Frank.

When did you realize war had come to your city?

ZF: It is a very interesting question… Today, when I look at April 1992 and hearing gunshots for the very first time, I now date that to the beginning of the war. But back then, there was one month which felt quite ambiguous – we did not go to school or work, but we did not BELIEVE the war was really there, we still went out into the streets on peace marches and thought that it would all be 100% normal very soon.

Why didn’t your family leave?

ZF: This related to my answer above—we did not believe that the war would last very long, because we never think wars will happen to us. It was also impossible for all three of us to leave together (because men were not allowed to leave the city) and we did not want to separate. By the time we realized things were very serious, the city was completely shut down and under siege, so it was almost impossible to leave.

What was the hardest thing for you and your family to live without during the war?

ZF: Lack of security I think was the hardest, just not knowing whether any moment would be your last or would be the last moment of someone you really love and care for. It was also hard to think of what to eat, how to cook once the electricity was cut off, how to get water once the water was cut off… The winter was incredibly cold, and we could not see any way out of the war. It was also terrible to hope for cease-fires and be happy whenever we heard of peace agreements being signed, and then feeling that terrible disappointment when they were broken. Nothing worse than hope being brought up and then have it crash down.

What brought you the most pleasure?

ZF: Not very much, but I was happy we had a little kitten in the neighborhood, and also that we were sharing very strong moments with our neighbors who we casually said hello to in the street before the war. We were now sharing food, sharing their joys and fears with them, and it was incredible to see so much humanity and kindness in the midst of so much cruelty.

What was the most frightening part of the violence?

ZF: For me personally, it was not so much the fact that I would die, but that someone I really care for would—my parents, or grandparents. I was also ‘planning’ that should I have to be wounded and lose the use of my legs, as a little of people had, I would concentrate myself on my piano-playing and become a great pianist. What a strange thing for an 11 year old to have to think about!

How was your diary chosen for publication?

ZF: This happened completely accidentally. During the war, regular schools stopped working, but a small ‘summer school’ was set up in small areas of the city, and there I joined a literary section, as I always liked to write and read. One day, in summer 1992, my teacher asked if anyone was writing a diary, because UNICEF were looking for a diary of a young person to publish. I gave some parts of my diary, and they collected these all over the city, and ended up choosing one for publication, which was mine. It came out in a small number of copies in Summer 1993 (it contained only the first three months of the war and only extracts of the original which I kept with me). Because of the strong presence of foreign journalists in Sarajevo at the time, they all started writing about it and the story got out into the world, which is when foreign publishers became interested in publishing the diary in its entirety.

ZF: It was a very difficult day—being happy to finally have a chance to leave the city which almost no one could get out of, having a chance to actually be flown out as a family which was next to impossible and only happened because of the intervention on the part of the French publishers and French government—and being so sad to leave everyone behind, all our dear family members, neighbors, knowing very well what we were leaving them in, and not being sure if we will see them all again.

How did you adjust to life away from conflict and how long was it before you felt safe again?

ZF: The first days in Paris I could not believe that we had safety, we had food and water and electricity—it was truly unbelievable and I kept checking the taps to make sure the water was still running! What followed though immediately after my parents and I came to Paris was a very extensive book tour all around Europe and North America, so I was traveling a lot and speaking to a lot of people about my experiences and about all those who stayed behind and were not as fortunate as me to leave Sarajevo and Bosnia.

Where do you live now?

What do you do there?

ZF: I have just finished working on another book of young people’s experiences of conflict, called Stolen Voices. I have a Masters in International Peace Studies and am also a part-time research assistant for Governance Resource Centre at University of Birmingham, UK.

Do you still keep in touch with friends from Sarajevo?

ZF: Yes I do, this is very important to me. Thanks to email, Skype and other wonders of technology, this is really easy these days. Not everyone from Sarajevo is any longer living there, because a lot of people have left during the war and like me, ended up staying where they ended up.

Do you still have relatives there and do you visit the city?

ZF: Yes, I have been visiting the city regularly ever since the war stopped – since summer 1996, sometimes spending two-three months at a time. Keeping a relationship with the city is very important to me and there are many dear people who are living there that I look forward to seeing every time I go back.

If you could say something to the girl, your younger self, who is pictured on the cover of Zlata’s Diary, what would it be?

ZF: I’d say to her: “Keep on believing and hoping, things can and will get better!!!”

Tell me about your new book, Stolen Voices.

ZF: It is a collection of young people’s war diaries, starting during the WW1 and leading up through the 20th century all the way to the present Iraqi conflict. Having seen the impact that one story can have, it was hugely important and interesting for me to work on a project like this one, alongside my co-editor and friend Melanie Challenger. Everyone in the book is below the age of 21, they are young people who at times of conflict at different points in history decided to express themselves and record the changing and violent world around them. It was incredible to see the similarities between them, as well as hear their individual voices and their incredible stories – and in the process of researching and editing this, I have slightly ‘fallen in love’ with them all.

How did you get the idea to create this compilation from young diarists?

ZF: The original idea arose from my co-editor Melanie Challenger, since she was working with young people and using Anne Frank’s diary, and she too was thinking of this power of individual story. Mel and I met for the first time in Anne Frank’s house in Amsterdam back in 2003, and started working on Stolen Voices, developing the idea further and making it grow into the book that it exists as now!

How do you feel reading the diaries of young people who didn’t survive their wars?

ZF: It makes me incredibly sad, of course. There is always so much life, so much youth, talent and hope in them, and it makes me very sad and angry to know that these young people did not have the lives in which they could have lived out their full potential.

What are your plans for the future?

ZF: I am currently involved in planning several celebrations—notably the International Day of Peace in New York and London 2007, and am working with Amnesty International USA to develop human rights education material around Stolen Voices. I am also looking for my next big project or a job, so fingers crossed!!