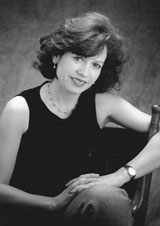 My daughters and I fell in love with a Gennifer Choldenko picture book before we ever started to read her novels for young readers. Moonstruck, the True Story of the Cow Who Jumped Over the Moon, is a lovely story of what someone can accomplish when she puts her mind to it. Then we were delighted to read Al Capone Does My Shirts in our mother daughter book club when the girls were in sixth grade; it was one of the few books that everyone in our group liked. Choldenko delivers for young readers again with her recently released novel, If a Tree Falls at Lunch Period.

Recently I spoke with Gennifer by phone about how she became a writer, how she creates her books and what to expect from her pen in the near future. (From a September 2007 interview. Since then, Choldenko has released Al Capone Shines My Shoes.)

Where did you grow up?

GC: I grew up in Southern California. Now I live in the Bay Area, near San Francisco in Marin County.

GC: I think it got decided for me. I always loved writing and I took every writing class I could get in. When I graduated I got a job writing advertising. I did it for quite some time, but after a while I felt I just couldn’t write advertising anymore. I decided to go to art school, because one of the things I really liked about advertising was putting together the visuals with the words.

At the time I didn’t have the guts to try to be a writer, because I felt that was going to be fraught with rejection. I thought, “There’s no way I can be a writer and write books.” I thought it would be easier if I was an illustrator. So I went to Rhode Island School of Design and got a degree in Illustration and as soon as I graduated all I did was write. I kept saying, “I’m going to do my portfolio tomorrow, but right now I’m going to finish this one novel first.” Something just opened up inside me and I thought, “I just gotta do this. This is who I am, and I can’t pretend I’m someone else.”

Does your design experience help with your writing projects?

GC: It helps with the picture books a lot, because I can visualize possibilities. Sometimes I come up with an idea that the editors forward to the illustrator. It was my idea of having a tree falling from the sky on the cover for If a Tree Falls at Lunch Period.

GC: I love to write. It’s so much fun. I love playing around with the words and trying to get the voices and the characters right. I find it very fulfilling.

What made you decide to write books for children?

GC: Again I feel like that was decided for me. When I took writing classes in college I didn’t think about being a children’s writer, but my characters were all younger than 18. I didn’t think that I was writing for kids, but that’s the way my voice comes out. When I went back to art school and I saw people who were both artists and writers I really gravitated towards them, and that’s when I realized maybe children’s books are a good place for me.

How many children do you have?

There’s a lot going on with Moose and his family in Al Capone Does My Shirts. How did you decide to write a historical fiction novel about Alcatraz that was about kids and included autism?

GC: I started out thinking I was going to write a book set on Alcatraz and I didn’t think there would be a character with autism. To learn about the history of Alcatraz I signed up to be a tour guide on the island, and once a week I worked there. One of the things I learned was how the convicts would be able to hear revelers in San Francisco during holidays, because sound travels differently on water. They would be in their cells and they would be hearing all these party noises but they couldn’t get out and participate. I also think Alcatraz is also one of the most beautiful pieces of real estate in the world. It reminded me of my sister who has autism. She was also quite beautiful, but she was locked in her own world. She could hear things going on around her, but it was like she couldn’t get out, like she was her own island. I pay attention to my intuition when I write, so I decided to create the character of Natalie.

Also, my brother, who loved baseball, was better with dealing with my sister with autism than anyone else in my family. It all fell into place, and I thought I would use a little bit of him in Moose.

Did you do much research on how people with autism were treated in the 1930s?

CG: I tried to, but autism wasn’t identified until 1943. It didn’t exist as a separate disease, so it was hard to find information. Sometimes people with autism were diagnosed as schizophrenic even though that’s a very different disease. But they really did not know what to do in that time. And they treated diseases differently. For instance, locking someone away, which from our viewpoint in 2007 seems horrid, was considered kind then. The thinking was, “They’re with their own kind, it’s better this way.”

That’s what’s really important about historical fiction. Times change and our perspectives on many things also change. So if you’re reading about characters who are true to their time period, their points of view on things can make you really uncomfortable.

Tell me about If a Tree Falls During Lunch Period.

GC: I had a lot of fun working on this book. My voice is naturally contemporary. It’s more of a challenge to get it to work in a historical setting.
There are a lot of issues in this book. You’re writing about classism and racism along with typical middle school issues of being popular and going through puberty.

How did you decide to write about these things?

GC: I think a lot of things came into play in this book. Classism bugs me, and yet I see it all around. Also, when I was kid I was bused from a predominantly white school to a predominantly African American junior high. All of a sudden I felt like I was the color of my skin wherever I went, and I felt like somehow I had to be representative of that. Or else people judged me based on skin color before they knew me. I had never experienced anything like that. I had never thought about the color of my skin. So it made a huge impression and I think that sort of seeped into this book also.

I struggled with getting the voices of Kirsten and Walk right. It was scary to create a character of a different race, because I felt like I was going to open myself up to criticism. But I also felt like not doing it was wrong. So I had to do the right thing for the book even if I didn’t feel like other people would necessarily agree with me on that.

I understand you’re in a mother-daughter book club with your daughter?

GC: Yes. I’ve really enjoyed it and I hope we continue on for many years. I think it will be fun as the kids grow and change and become more sophisticated and probably interact with books in a different way. My daughter is a voracious reader, but she doesn’t speak up much in the book group. She always looks forward to our meetings, and if for some reason I have to miss one she’s really unhappy about it. That’s the best indication that it means something to her.

What are you working on now?

GC: I have five books under contract. Three of them are picture books, and two are novels. One is a sequel to Al Capone Does My Shirts. There’s a lot of information that I wanted to use in the first one that I couldn’t. If all goes well with the sequel, I hope to write a third one and create a trilogy.

Anything else you’d like to say to readers at Mother Daughter Book Club.com?

GC: What you’re doing is a great thing. I think you will reap benefits from it for many years beyond the years you spend in it. Because kids can talk about things within the safety of the pages of a book, I think it’s an important forum that really helps the relationship you have with your kids.