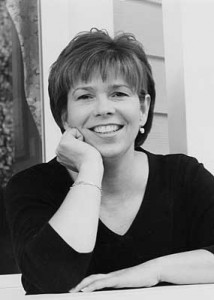 Kirby Larson wasn’t expecting to write historical fiction when the story of Hattie Inez Brooks found her. Her books before Hattie Big Sky were written for younger readers, but as Larson says, “You never know where life is going to take you. Sometimes there’s a story that takes hold of your heart and there you go.” And readers have been happy to go with her. Recently Larson talked with Mother Daughter Book Club.com by phone from her home near Seattle, Washington. (From an interview in August 2007.)

Where did you grow up?

How old were you when you started to write?

KL: Kids always ask me that. I’ve been writing for about 20 years, and I started when my children were small.

What attracted you to writing?

KL: I’ve always been a bookworm. As I mentioned, I moved around a lot, and one of the problems with being the new kid is it takes a while to make new friends. But I always had my books. There came a point when I wanted to try writing my own stories, but I didn’t know when I was younger that writing fiction could be an option for people (for a career). I wrote for newspapers and magazines, but not with the idea that I was going to write fiction.

How did you decide to try your hand at fiction?

KL: I remember the moment I decided I wanted to try writing something for kids. My two children were small, and we used to go to the library all time. We checked out a picture book by Arnold Lobel called Ming Lo Moves the Mountain. When we read it I had my son on one side of me and my daughter on the other, and we were sitting on our couch. When I turned the last page it was like a switch went off inside me. I said to myself, “I want to learn how to write a book that will touch other people the way this book has touched me.” That same day I called a really good friend of mine and asked her if we could trade babysitting. I’d go to the library while she had my kids twice a week for two hours and I wrote on a yellow pad with a pen or pencil. I did that for a couple of years.

Your earlier books are written for younger audiences. How did you decide to start writing for an older audience and write Hattie?

KL: I had no idea I was going to write the book. The book found me through my grandma, who was living in an adult care home near the end of her life. I was spending a lot of time with her, because I was one of her caretakers. We were sitting there one day when out of the blue she said to me, “The only time mom was ever afraid was in the winter when the wild horses stampeded.” I said, “Grandma what are you talking about?” But she didn’t even know she’d said that to me. I knew she was talking about her mom, my great-grandmother Hattie Inez Brooks.

So I started talking to my aunts, and my mom’s oldest sister said, “You know we did hear a story that Hattie homesteaded by herself.” I knew Hattie as this tiny little woman with white hair and thick glasses. I couldn’t imagine her as a homesteader. But I had a friend who was into genealogy research and she found the Montana Bureau of Land Management Web site that listed a claim number for Hattie. I sent that number to the National Archives, and within a couple of months I had all of Hattie’s homestead documents. I found out that she not only went to Montana, but she proved up on a claim there!

I was so fascinated about how a young woman could do this I started reading journals and diaries, and everything else I could find on that time period and on homesteading in eastern Montana. Before I knew it, there was a story there, and that started me on a three-year research journey. So I didn’t sit down to write a novel, in fact I would have been petrified if I would have told myself, “okay today you’re going to start working on a historical novel.”

Do you expect that you will write novels for older readers again?

It sounds like a fun career to be able to follow what your heart is telling you at the moment.

KL: I feel so fortunate that I’m able to do this. It’s lonely, too, because you’re sitting in your office most of the time not knowing whether your story will connect with anyone else. But I think if you find your passion and you go with it you are rewarded.

What is the most fun you have as an author?

KL: I think it’s twofold: fun for me is in feeling like I nailed something, like I really got the story right. With Hattie I feel like I really got the time period right, and I got her voice right. The other thing is, I get e-mails from people everyday who loved her story. Here I am sitting in my little office in Kenmore, Washington, and someone in Missouri or Kentucky or Vermont or Maine is reading my book and connecting with it. It’s mind-boggling.

KL: Absolutely. When I first got the idea for Hattie it was just going to be a homestead novel. But the more I read about that time period, the more I became aware of the really strong anti-German sentiment and that people suffered harsh consequences not only for being German Americans, but also other folks who might question the treatment of German Americans or might question our being in the war at that time. It was also the struggle of answering the question, “How do you be a good citizen?” It was similar to the issue I was wrestling with in my own personal life in 2001 and 2002 when I was writing the book, which was when we first got into Iraq. I think writing about a different time period allowed me to explore some of the questions that were going on in my own life.

How much of what you knew of the real Hattie and her personality did you put into the character in the book?

KL: She died when I was 10, and I loved her to death but I didn’t know her as a person. If I had to pick one person who is most Hattie-like I think it would be my grandmother.

How did you feel when Hattie Big Sky was named a Newbery Honor Book?

KL: I burst into tears. I got the call very early in the morning. First I was speechless. I couldn’t even respond at first; then I was in tears. It’s such a significant honor. I read a lot so I know the books they were considering and to think that Hattie would have been selected was beyond imagining. I call this book a love letter to my grandmother who died before the book came out. I felt like there was so much of my connection with her caught up in this book, and to have that acknowledged by someone else was an emotional overload for me.

I understand you visited a mother daughter book club meeting with your daughter?

KL: Yes. It was really a fun evening. I am so impressed with the commitment that moms are making now to this concept. I think it’s an important way for moms to be together with girls, especially when they are pre-teen. You can talk about some tough issues that may be affecting your daughters, but since they are a character’s issues it’s a safe way to bring them up. I loved how the girls had their questions to ask and the moms had their questions to ask. They were all interacting as if they were equal. And I think it’s nice to have other adult women in your life when you’re growing up. I can see these book clubs working on a lot of different levels to help girls get through those tough pre-teen and teen years.