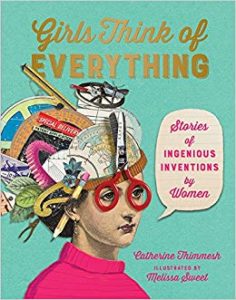 Flat-bottomed paper bags at the grocery store are the norm, now, but did you know that not so long ago people brought groceries home in a wooden crate? And that the person who invented the bags we see stacked beside registers today was a woman named Margaret E. Knight?

You’re probably aware of the problem plastic waste creates by piling up in landfills and choking waterways. But did you know that a teen from Egypt has created a way to turn used plastic into fuel? Azza Abdelhamid Faiad’s goal is to figure out a way to use her invention commercially and help countries develop sustainable waste management systems.

These are just two of the women and girls profiled in Girls Think of Everything: Stories of Ingenious Inventions by Women, written by Catherine Thimmesh. Other featured inventors created windshield wipers in cars, the super-strong fiber Kevlar, a baby seat sensor that can help save lives, an anti-bullying app, and more.

Often, these women and girls were told no one could do what they imagined doing. But they persevered anyway, even when their experiments and trials took months or years to develop into what they imagined.  The stories are likely to inspire girls to look at the world around them in a new light, as a place with problems they can solve if they put their minds to it. A section at the back of the book even has advice on how to file a patent on an invention.

Also of interest is the list on the inside front and back covers of major inventions by women through time, starting with the pre-1800s and progressing by eras until the present. It’s noteworthy that the list from 2010 to the present is the longest by far, with over 40 women listed. Only 15 women are featured in the book, but curious girls can easily look up details of any of the others listed.

I recommend Girls Think of Everything for readers aged 9 and up. It would make a great mother-daughter book club selection, with moms and daughters talking about inventions they can imagine that would make the world a better place.