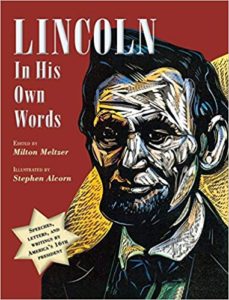 During the course of his public life, Abraham Lincoln left a vast record or speeches and correspondence that give insight into his views on important issues of the day. Lincoln in His Own Words, edited by historian Milton Meltzer, directly reprints select passages to help readers build an understanding of this complex man who played a crucial role in U.S. history.

Lincoln’s more famous speeches, like the Gettysburg Address and his inaugural comments, are included, but so are more personal notes, like his letter to the daughter of a man who died in battle. Lincoln’s political speeches clearly point to his objection to slavery long before he became president. They also show his belief that the U.S. Constitution was something to be defended at all costs, laying out his arguments for why secession could not be valid.

Stephen Alcorn’s illustrations of famous people during Lincoln’s times add interest, as do the brief profiles of those people at the back of the book. A chronology of events during Lincoln’s lifetime also helps to put his life in perspective of other things happening in the country.

I recommend Lincoln in His Own Words to history lovers and readers aged 14 and up.