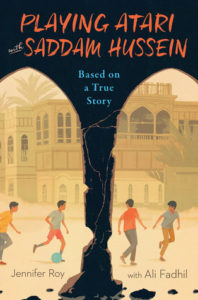 Ali Fadhil was just an ordinary boy living in Basra, Iraq in 1991. He loved to play soccer with his brothers and his friends, he worried about school bullies, he spent a lot of time playing video games, and he watched American television shows. Then the dictator of his country, Saddam Hussein, invaded a neighboring country, Kuwait. To counter the aggression, an international coalition led by the U.S. bombed Iraq in an effort to get Saddam to withdraw.

Playing Atari With Saddam Hussein by Jennifer Roy is based on the true story of Ali, who was 11 years old at the time, and what he experienced during the forty-three days that would be called Operation Desert Storm. The story talks about how the family bunked together in one room when the bombs fell at night, how they stretched rationed food to feed a family of five, and how Ali’s dad, a physician, got called to the front where he could tend to soldiers’ injuries.

Ali’s story reveals what life was like for average Iraqis during the fighting, and how those critical of Saddam Hussein had to keep quiet or risk retaliation and death. Even though he is young, Ali understands much about the politics of his country and he longs for the U.S. and its allies to get rid of the dictator in charge. He will wait until the second war in Iraq, during the early 2000s, to get his wish.

A last chapter and epilogue talks about how Ali helped the American effort in that second war, and how his life changed because of it. I highly recommend Playing Atari With Saddam Hussein for mother-daughter book clubs with girls aged 9 to 12 and for anyone interested in recent historical events that still resonate in today’s world.