Don’t Forget Dexter is an adorable picture book that celebrates the bonds between a child and his special toy. Today I am taking part in a blog tour with a feature interview of the book’s author, Lindsay Ward, who says she was inspired to write this book after her husband texted her a photo of a toy dinosaur abandoned at a doctor’s office. The caption read: “Well, they left me here.” Lindsay thought it was so funny that she sat down to write Dexter’s story immediately.

Ward is also the author and illustrator of Brobarians, Henry Finds His Word, and When Blue Met Egg. Her book Please Bring Balloons was also made into a play.

Most days you can find Lindsay writing and sketching at her home in Peninsula, Ohio, where she lives with her family. Learn more about her online at www.LindsayMWard.com or on Twitter: @lindsaymward. 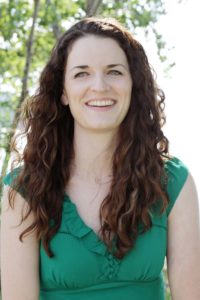 How did you decide to become a writer and illustrator?

LW: When I was 15 I got my first job working at a children’s bookstore. I was lucky enough to meet many authors and illustrators who came to visit and sign books. I was fascinated by what they did. I fell in love with picture books. I always knew I wanted to be an artist, but I wasn’t sure what field of art I wanted to go into. Had I not worked at Hicklebee’s, I don’t know if I would have ended up becoming a children’s book author and illustrator.

What do you especially like about creating children’s books?

LW: It really is the best job ever. To be honest it’s never really felt like a job at all, but a privilege. Besides the creative part, which is always new and exciting for each book I do, meeting my readers is my favorite thing about being an author/illustrator. I feel honored to be a part of the reading experience parents share with their kids.

What is the hardest thing about it?

LW: Probably the creative process, which also happens to be one of the things I love the most. It can be frustrating and debilitating at times. But that moment where everything clicks into place is totally worth it.

Even though readers don’t see Jack for most of the book it’s clear that he loves Dexter. Do you remember a toy from your own childhood that you loved that way?

LW: I had a Raggedy Ann doll that I took with me everywhere. I distinctly remember putting band-aids on her to “decorate” her arms with. I never took the band-aids off, so they basically permanently welded themselves to the fabric for the rest of eternity. My mom still has the doll to this day.

Dexter shows a lot of personality and he tends to get emotional. What inspired you to create him as a character?

LW: When I was pregnant with my first child, my husband was required to go get a T-Dap booster shot prior to our son’s birth. While waiting to get the shot, my husband texted me a photo of a toy dinosaur that had been left underneath a chair in the waiting room. Following the photo, my husband texted “well, they left me here.” The image and line were so funny to me that after reading the text I immediately sat down to write Dexter’s story. I knew I wanted Dexter to speak directly to the reader right from the start of the story. Breaking the fourth wall allowed me to develop a voice for Dexter that was funny and neurotic. I don’t think I would have been able to achieve that if he wasn’t addressing the reader. I love all of Dexter’s insecurities; it makes him more child-like and relatable. We all have insecurities that we worry about. Dexter is 100 percent honest about how he feels all of the time. I think that’s what makes him so endearing.

Children can sometimes be afraid that their parents may forget them. Were you hoping to address that issue in Don’t Forget Dexter?

LW: This actually never crossed my mind in the early stages of writing Dexter. I was more concerned with writing a funny story about a neurotic but lovable dinosaur who gets left behind. It wasn’t until my agent pointed this out to me that I realized it connected with a child’s fear of being forgotten. For me the story is more about the love between two friends. It was important to me that the reader sees Jack just as distraught as Dexter is over being separated from each other.

Do you believe the book could inspire conversations between parents and their children about that fear?

LW: Yes. As I mentioned above, it wasn’t my initial thought, but if this book can start that conversation and subside that fear for a child, that’s a wonderful thing.

I understand this is the first book in a series. Can you share with readers anything about adventures to come?

LW: Yes! I’m thrilled to share the next book in the Dexter T. Rexter Series which will be released July 17th, 2018. In the sequel, Dexter is headed to school with Jack for show-and-tell. Dexter is so excited, but soon he starts to get nervous about his big day. What will he wear? How will he impress the other kids? What if they don’t like him? Find out what happens to Dexter in It’s Show-and-Tell, Dexter!

Is there anything else you’d like to add to readers at MotherDaughterBookClub. com?

LW: Just that I really appreciate this site! My mom and I read together every night when I was a kid. She always made time for it even though she was a single parent, and that couldn’t have been easy. It’s something that I will always cherish and that definitely shaped me into the reader and person I am today. My husband and I continue that tradition with our boys every night. Thank you for sharing your reviews with readers everywhere.