I recently reviewed City of Grit and Gold by Maud Macrory Powell, a great choice for historical fiction in a mother-daughter book club. Powell was kind enough to answer a few questions for readers here at MotherDaughterBookClub. com. Plus, she’s been in a mother-daughter book club, and she’s willing to Skype or call in to any group reading her book! Send her a note if you’re interested at maudpowell72(at)gmail(dot)com.

But first here’s her bio: 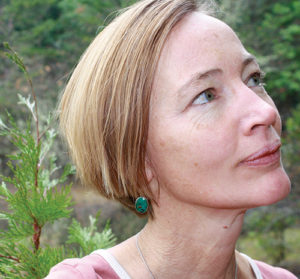 Maud Macrory Powell comes from a family of writers. She was born and raised in Washington, D.C. and studied comparative religion in college and environmental studies in graduate school. Maud and her husband run an organic seed and vegetable farm in the Siskiyou mountains of southwestern Oregon. They grow fruits and vegetables for their local community and raise vegetable and flower seeds that are shipped, sold, and sown all over the country. Maud thinks of her words and stories like the seeds on the farm- she creates fertile ground for them, cultivates and crafts, separates the good from the chaff, then scatters them as far and wide as they will reach.

Her essay “The Fruits of My Labor” was published in the anthology Greenhorns: The Next Generation of American Farmers. City of Grit and Gold is her debut novel. Find out more at MaudMacroryPowell.com.

And here’s the interview.

How did you get started writing for young readers?

MMP: City of Grit and Gold is my first book for young readers. I homeschooled my two children and our days centered around reading aloud. My daughter Grace and I were actually in a Mother-Daughter book club for two years! My very favorite books to read aloud were historical novels, as they transported us to different places and times, taught us about history, and the good ones had characters we related to and learned from. After reading so many books in that genre, I had a sense of how the novels worked and wanted to try my own hand at one.

What do you find challenging about it?

MMP: I enjoyed researching the time period and finding out more about what happened during the labor movement in Chicago during the 19th century, but I did find it challenging to figure out how much history to include in the book. A writer friend cautioned me early on to not get bogged down with historical research. She told me that I might want to include too many historic events and dates, and I might lose sight of my plot and characters. My goal was for kids to learn about the time period, but I needed them to believe in and care about Addie and her family first and foremost.

What do you enjoy most?

MMP: This may sounds strange, but I loved getting to know Addie and her family. I spent quite a bit of time sketching out each character, and once I started writing, they each took on a life of their own. When I went to write a certain scene, I wasn’t always sure what would happen or how the characters would interact with each other. As I delved further into the book, I continued to learn more about each character, especially Addie. The process of writing fiction is fascinating and incredibly enjoyable to me.

Why do you think it’s important for kids to read historical fiction?

MMP: I personally love history. We can learn a tremendous amount from the mistakes and achievements of those who have gone before us, and also understand why we face particular challenges and opportunities today. But more than that, I find it fascinating to learn about how people lived in the past. I think historical fiction is especially important for kids because the personal stories, usually told by or from the perspective of another kid, give them a way in. History presented in dates and events can be dry, but reading about how those dates and events affected a kid from that time period makes them relevant and exciting.

Why did you want to write about Addie and the tumultuous times in Chicago during the 1880s?

MMP: Of the dozens and dozens, perhaps hundreds of historical novels that my kids and I read, only one touched on the labor movement in America. It’s a subject I am particularly interested in and thought kids would want to learn about more.

The adults in Addie’s life are torn between living with conditions as they are and fighting for a better life. Do you see parallels in today’s world?

MMP: Yes- there are lots of themes in City of Grit and Gold that are relevant in today’s world. In particular, the 19th century unions were fighting for an eight hour work day, while today’s workers fight for living wages and better benefits. Addie and her family were immigrants, and faced some discrimination along with many other challenges of living in a foreign country. Today, our politicians are grappling with Immigration Reform and many immigrants deal with discrimination and the fear of deportation. Finally, issues relating to the freedom of assembly, the use of force by police, and the use of violence as a tool for change are all touched on in City of Grit and Gold. These are all very complex issues which are hard to understand and even more difficult to resolve.

MMP: Fiction is easier to write than you might expect. I had been intimidated by fiction and was in awe of authors who regularly think up plots, scenes and characters. Starting my first novel was like stepping off a cliff – I had no idea where or when I would land. But I found that my mind was full of ideas and stories and people, and I believe that we all have stories to tell. Try it!