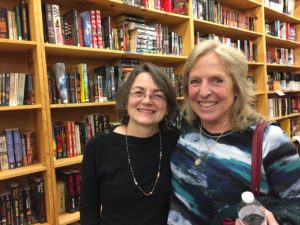 That’s me on the left with author Ellen Hopkins at Powell’s bookstore in Portland.

Ellen Hopkins is the award-winning writer of several books for young adults, including Crank, Burned, Impulse, and Identical. Recently, I had the chance to sit down and talk with her about her latest book, The You I’ve Never Known, how she started writing for young adults, and why she thinks it’s so important to write about difficult topics. She also opened up about some of her personal experiences that have inspired her writing.

When we met, I asked Ellen to sign a copy of The You I’ve Never Known to give away at MotherDaughterBookClub.com. That copy will go to one reader who comments here about why they read books that challenge them in some way. J(Please note: the giveaway is closed. Congratulations to Denise on winning.)

MDBC: How did you start writing for young adults?

EH: I published 20 nonfiction books mostly for middle school in history, science and biography. When my daughter got hooked on meth it was an experience that obviously affected the whole family.

She went to prison and I started writing Crank for me, trying to figure out why. Which is why I chose to write first person from her point of view. To try to get into her head some, to walk where she was walking. And then through the writing process it became clear that this was a story that needed to be told to young adults. It is a cautionary tale, and I hope people who read it see it that way.

After that I talked to so many kids, and then I started connecting online with them and they would tell me stories. It became a passion for me to become a voice for them.

MDBC: You cover a lot of difficult topics in the books you write. Why do you think it’s so important to do that?

EH: For kids it’s all about discovery. They’re looking for who they are. In this book specifically, (The You I’ve Never Known) she’s looking for who she is. She’s desperately trying to find out who she is and there are a lot of kids like that.

Kids are looking for love and acceptance and direction. Writing YA allows you to give them direction without them feeling like they’re being preached to.

MDBC: Why are your books important for moms and daughters to read together.

EH: I think both sides can develop insight. First of all, I think for parents to understand that this is real. This is what school is like, this is what the back seat of a car is like. It helps parents remember who they were as teenagers too, and maybe can open up that kind of dialogue.

Also I think if mothers and daughters read books together the kids will feel more open to expressing their own pain. Often times kids think their moms don’t care or their moms are too busy. I’ve had moms read my books and tell their daughters stories about their own adolescence that maybe they wouldn’t have opened up and mentioned.

MDBC: What do you find particularly compelling about telling a story in verse and prose, like The You I’ve Never Known?

EH: Verse is immersive. It puts you so deeply inside characters because you’re allowed monologues. There’s a lot to comprehend, and the white space allows you to pause when you need to, and you can think about it, especially if it’s a heavy passage or a hard scene.

MDBC: I was also struck by the complexity of the issues. There’s something going on with Ariel and her dad but layered on top of that she’s questioning her sexuality. What made you want to add a layer of complexity to what already was a complex story?

EH: In my life every time I get myself figured out in one way something else happens, and for kids that’s happening all the time. When you’re young you don’t even realize what sexuality means or the power of it or how to compartmentalize that part of yourself around everything else.

Nowadays there’s so much discussion among teens about sexuality and what is right. There’s a lot of acceptance towards being gay. There’s this idea that gender and sexual identity don’t have to be set in stone. I think trying to bring some kind of enlightenment to that so people can see if that’s you that’s okay too, you don’t have to decide you are one thing or another. Maybe you’ll move on and you will decide, but I think probably a lot of young people experiment.

MDBC: You had a similar experience in your own life with an ex-husband, is that correct?

EH: He was an abuser who I stayed with way too long. Three weeks after we finally divorced, against court orders he took our daughter out of daycare. I lost her for three years. I didn’t know where she was; I didn’t know if she was okay.

Things in this story are different, because I always try to give characters who reflect things in my real life a little distance.

MDBC: Tell me about your nonprofit group.

EH: It’s called Ventana Sierra (Find it on Facebook: https://www.facebook.com/VentanaSierra/) Our goal is to help foster kids or kids who are at risk get the resources they need to start college.

MDBC: Is there anything else you’d like to say to moms and daughters who are reading together?

EH: To trust each other. I think young people tend to start to look at their parents as the enemy, as the person who doesn’t want them to have experiences. If you can learn to trust and develop those communication skills and to keep them open and to understand that even if something comes in that’s not what you want to hear it’s better to work through it sooner rather than later.

And if you read together you might strike a nerve somewhere. And that works for both sides.

MDBC: What’s next for you?

EH: I’ve got another adult book in revision that should be out in fall (2017) or next spring. And I’m writing a YA title for 2018 that addresses gun violence.