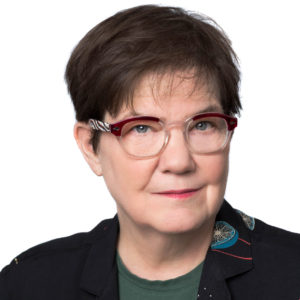 I recently had the chance to meet with Ellen Klages, a favorite author of mine. Her first novel, The Green Glass Sea, won the Scott O’Dell Award and has long been popular with mother-daughter book clubs. The sequel, White Sands, Red Menace, is also a great book for young readers as well as their parents.

In the years since publishing those two novels, Klages has been busy writing short stories and nonfiction pieces. Earlier this year she released a novel for adults, soon to be followed (in May) by a short-story collection appropriate for ages 15 and up called Wicked Wonders. My review of that book will appear soon.

Here she talks about the differences and similarities between writing for children and adults, reading for fun, and her next book for young readers due out in 2018.

MDBC: You write for young readers, you write for adults. What’s the challenge of moving back and forth?

I think for the most part a lot of it vocabulary. Kids looking at a sunset would describe it in a completely different way than adults would. And one wrong word can just throw you off because you’d think, “A kid would never say it like that,” or “A kid wouldn’t care about that.” I try not to write any differently for kids because otherwise I feel like I would be talking down to them.

A lot of stuff will go over kids’ heads the first time they read it. I’ve had kids tell me, “I read this (The Green Glass Sea) when I was a kid and I went back and reread it and there’s so much more in it.” I don’t want the story to be any less rich if you don’t get the nuance.

MDBC: Because there’s so much more to life right?

EK: Yes. And because I write mostly female characters I’m not going to write girly girls. I’m going to write about girls and science, or girls and sports, or girls and math. Or girls in space and hope that if you’re reading that when you’re 10 that sometime when you’re in college you’ll go, “You know I think the reason I majored in this is because I read this book when I was 10 and I got really interested.”

And I certainly don’t want to encourage stereotypes of any kind, because there’s so much of that out there.

MDBC: What do you think can be gained from moms and daughters reading your stories together?

EK: I’ve been at a couple of mother-daughter book club meetings and a lot of times the kids are too shy to talk initially and the adults do all the talking. And then a kid will say, “No mom, because of this…,” and they’ll get into a dialogue about something. Or the adults are kind of awestruck because I wrote this book and the kids say things like, “Why did you do this? I didn’t like that part.” Hopefully it’s a conversation from two different perspectives about the same thing that gives them common ground to talk.

I didn’t share anything with my mom. My mom either foisted stuff on me that I didn’t like or pooh-poohed the stuff that I liked as a 10 or 12 year old. So it’s kind of an alien concept to me, but I think it’s fabulous that you’ve got this book that you both love and you’re talking about it in a way that kind of bridges the age gap. The moms obviously understand a larger worldview, but the kids are getting the kid perspective. So they both learn and they both have a good time.

I was 10 fifty years ago. All the mother-daughter things I can remember involved sewing or baking or trying to make little girls be more like their mommies. I think the nice thing about these book clubs is that nobody is trying to swing the other side over to their point of view. At least in the one’s I’ve experienced there’s a pretty equal balance of who’s bringing what to the table. And that’s really cool.

MDBC: Do you think having kids choose something to read because it’s fun helps them become avid readers?

EK: Oh yeah, when it’s homework you just want to get it over with. I was one of those kids who would go through four or five books in a weekend and didn’t want to do anything else.

MDBC: Where did you get your books?

There was a used bookstore in downtown Columbus (Ohio) and none of the books had covers. They were all paperback and they cost like a nickel. So for $1 I could get 20 books. They were a nickel apiece so I was buying the fattest ones I could that didn’t look really boring. I was reading everything.

MDBC: Tell me about your new short-story collection, Wicked Wonders, (which I would recommend for readers aged 15 and up).

EK: A lot of the stories have younger protagonists, but that doesn’t mean they’re for kids. Sometimes I find my books in middle-school libraries, because librarians know me as the author of The Green Glass Sea. The themes that many of (the stories in Wicked Wonders) deal with are emotionally wrenching, including one that’s a Holocaust story. Another story is about a man with a son who has Down syndrome that I think is the most poignant thing I’ve ever written.

MDBC: In your historical novels for young readers, you say you try to focus on science and math and sports, kind of nontraditional things. What’s your thought behind that?

EK: Not to write a book about sewing because I hate it.

MDBC: What can you tell us about your next book for young readers coming out in 2018?

EK: It’s called Out of Left Field, and it’s about girls and baseball. It takes place in 1957. A girl wants to play Little League baseball, but Little League doesn’t let girls play. It took me two years to find and ending that was realistic and wasn’t condescending.