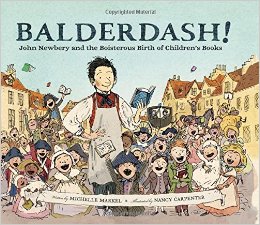 With the mountain of great children’s books to choose from these days, one could be forgiven for imagining children’s publishing has been around as long as adult books have been available for the masses. But it wasn’t until John Newbery (the man the Newbery Award is named for) became a publisher in the mid-1700s that books children could read for fun came along. Before that, children were expected to read preachy poems and manuals with lots of rules on how to conduct themselves.

Newbery’s life and the influence he had is told, fittingly, in a picture book by Michelle Markel called Balderdash! John Newbery and the Boisterous Birth of Children’s Books. The cover sets the tone for the story, with an aproned Newberry holding an open book surrounded by cheering children, many also holding books.

The tone throughout the book is playful and irreverent, which is how many in Newbery’s time saw him. But children loved the books he published, which were small and pretty. Some even came with a toy. It is believed that Newbery wrote many of the titles he published, but the author was officially anonymous.

Balderdash! ends with a short bio of the man, more about the books he published, and references for further reading. Book lovers of all ages will enjoy reading about this man who is so important to the emergence of good literature just for children.