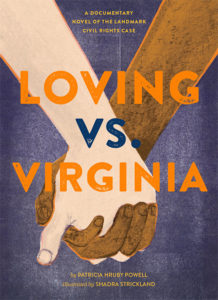 Mildred Jeter and Richard Loving met each other when they were children living in the same neighborhood, something unusual for segregated Virginia in the 1940s and 50s. They fell in love and went to Washington, D.C. to get married, as it was illegal for them to marry in their own state. But they also found it was illegal for them to live as a married couple in Virginia, and they were banished from their homes. Yet they fought back through the courts, and the Loving vs. Virginia case made it all the way to the U.S. Supreme Court, which ruled in their favor.

Patricia Hruby Powell tells their story in verse in the documentary novel, Loving vs. Virginia. Readers hear the story from the perspective of both Mildred and Richard beginning when they were teens first becoming aware of each other. Their courtship is similar to that of any two people falling in love, except they have to be careful not to let the local sheriff get wind of it.

Inserted into the story are historical documents that make clear what the two were up against. For instance, a Virginia Health Bulletin from March of 1924 outlines a new law “to preserve racial integrity.” This law was to prevent biracial children from entering schools for whites only. Quotes from judges and elected officials defending the need for racial segregation underscore the larger struggle taking place in the nation for civil rights.

Artwork by Shadra Strickland brings the two people at the center of this historic struggle for permission to marry across racial lines to life. Readers see them for they were: two people who wanted only to love each other and raise their children where they chose. I recommend Loving vs. Virginia for readers aged 9 and up.