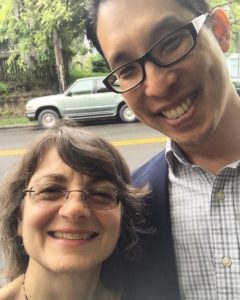 When Gene Luen Yang came to Portland for a presentation with Multnomah County Library, I was fortunate to meet with him for an interview.

During our time together we talked about his background as a teacher, his message as National Ambassador for Young People’s Literature, and of course, his graphic novels. He was also kind enough to take a selfie of the two of us when the interview finished.

You may want to check out my reviews of three of his books: Boxers, Saints, and Secret Coders.

To find out more about Yang, his books, and his other adventures, visit his website, geneyang.com. Now, here’s the interview.

Tell me a little bit about your background.

GLY: I was a teacher for a number of years. I taught mostly computer science, but also a little bit of math, a little bit of art. In modern American culture it seems there’s a divide between the arts and sciences, the arts and math. I think that divide is artificial. If you look throughout history both in the East and West there are plenty of people who are good at both.

What is your goal as Ambassador for Young People’s Literature?

GLY: Generally speaking every ambassador is supposed to get more kids reading and get kids reading more. I’m focusing on a platform of reading without walls. I want to get kids to go outside of their comfort zone. I try to challenge them to try to pick a book about somebody who doesn’t look like them, and I like talking about the cover. I don’t know if you know this but there’s a controversy in children’s books about the cover. Some people believe publishers will actively avoid showing the faces of people of color. So I want to get kids to pick books with diverse characters, specifically on the cover.

Second, I want them to pick topics they don’t usually pick. My pet project is STEM topics. There is a subset of students who find those topics almost unapproachable, and I really think that story is a great way of getting into STEM.

And finally I want them to try books in different formats. I think it’s a really exciting time for children’s books right now, because there’s so much experimentation about format. We have prose books, we have graphic novels, we have books in verse, and we have hybrid books that use multiple formats to tell a story. I meet students every now and then who only stick with one format, and I really want to challenge those kids to try it all.

What do you tell teachers about using graphic novels in the classroom?

I think there’s a fear among parents and teachers that graphic novels are here to replace prose and poetry. But I don’t think that’s the case. I think it’s actually part of the diversity of reading. It’s like when television came out, they were worried it was going to replace movies.

The comic book, the graphic novel is essentially a medium that combines two distinct media, text and word. In some ways, I think, the literacy skills that you get from reading graphic novels is translatable to digital media, to the web.

Tell me about Secret Coders. Do you hope to get kids interested in coding through the series?

That’s the point. When I was teaching computer science I used to teach in this really visual layout, doing a lot of drawing on the board. And I thought a lot of these lessons could translate to comics. It’s that same applied comics, it’s not just about getting an emotional response from the reader, but it’s all also about there being information I wanted to teach through comics. And that’s what Secret Coders is about.

So what I try to do is structure every chapter of Secret Coders like I would one of my lessons. In the beginning I do a little bit of review and in the middle I introduce some new material. At the end I give my students some kind of small exercise they can do to reinforce what I just taught. That’s how every chapter of Secret Coders is going to go. A little bit of review, some new material, and an exercise.

What do you love about creating graphic novels?

GLY: I think that all the stories that human beings tell make up the canon of a centuries long conversation about what it means to be human. So when we’re reading stories, and especially when we’re writing them, we’re participating in the conversation.

I think the best stories appeal to multiple generations at once. I think a really good story will be something you read multiple times and each time you get something different out of it. A well-created graphic novel will do that beautifully.

One of the things that I think about when I’m composing my own graphic novels is that for every panel there really ought to be just one primary emotion and maybe just one primary piece of information you’re trying to convey because some people read them really fast, so they’re getting one thing out of each panel. So just to make sure you don’t lose those people there should be a focus for every panel. But graphic novels also give you a way of putting things in the background that somebody who’s reading quickly may come back to.

What do you say to kids who may be interested in becoming a graphic novelist?

GLY: Especially when they’re starting off, it’s very important to work against that inner critic of thinking you’re not good enough and letting that get in the way of you not finishing things. That’s something I struggled with. I started to read this book when I was just starting off called The Artist’s Way(by Julia Cameron). I think a lot of what it addresses can apply to young people who are just starting off. Not just in comics but in anything creative. It’s a way of taming your inner critic.

GLY: It’s awesome. I think it’s a privilege. I do want to return to teaching at some point. I don’t know if it will be full-time, but I love having my own classroom.

What have you found is the most surprising thing about writing graphic novels?

GLY: It takes so long. You spend so much time by yourself in front of the drawing table. I try to write in the mornings and I try to draw in the afternoons. When I’m writing if I’m doing the thumbnails I try to do five pages in the morning.