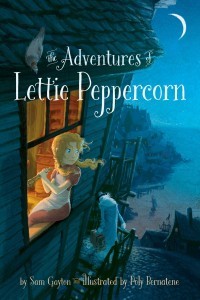 Twelve-year-old Lettie Peppercorn would love to have an adventure. But when her ma disappeared many years ago she left a note warning Lettie to never leave their home. Now she watches over her family seaside inn while her da drowns his sorrows at the pub. But one day the wind blows in a mysterious man who claims to be an alchemist who can make something new: snow. And while he is soon exposed as a fraud, he claims to know her ma.

In the blink of an eye Lettie is off on a true adventure. Aided by a boy who owns his own ship, sailing where the wind takes her, followed by two greedy women, and up against incredible odds, Lettie finds out the truth about her family and figures out how to make them all happy again.

The Adventures of Lettie Peppercorn by Sam Gayton is a story as original as its heroine’s name. Lettie and her friend Noah use their imagination and a little bit of alchemy to get out of all kinds of tight spots. The women and men who want to stop them are driven by their greed, which also limits then and blinds them to anything other than personal wealth and recognition.

Illustrator Poly Bernatene captures the magical feel of Lettie’s world and enriches this story that transports readers to another world that almost seems like it could exist here on Earth, if the wind would just blow us there. I highly recommend The Adventures of Lettie Peppercorn with mother-daughter book clubs with girls aged 8 to 12.