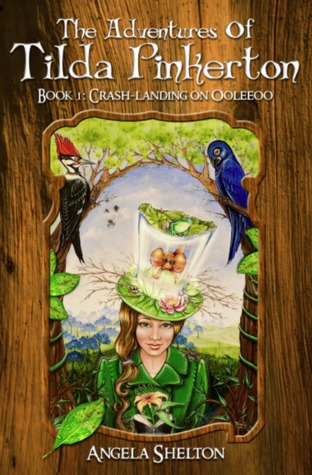 Tilda Pinkerton lands on the planet of Ooleeoo with a bent light atop her head and no memory of who she is or where she comes from. But she does have a specific flair for making incredible hats that help the wearers bring out their talents. Unbeknownst to Tilda, she is a crucial player in a game of intergalactic warfare, with others of her kind fighting against the evil KOD, who sucks everything good into his black hole.

On Ooleeoo Tilda becomes beloved of children and adults alike, but her enemy is searching for her everywhere, and when he finds her he intends to destroy her.

The Adventures of Tilda Pinkerton, Book 1: Crash Landing on Ooleeoo by Angela Shelton is by turns fun to read and thoughtful. Tilda knows just how to bestow her hats to bring out the best of the people who receive them. She won’t make a hat for someone until they are ready to receive it, but since the hatless don’t realize this, jealousy thrives. Before long, some townspeople are spreading rumors about Tilda and turning others against her. It’s an interesting look at how doubt, once created, is hard to dispel even when you know rumors to be untrue.

There are a lot of characters to get to know, and they all have odd names, but really that just adds to the fun. There’s a glossary of names that you can refer to if you need it. Everyone’s name means something, such as Louie Luminiferous, who invents all things light on Ooleeoo, and Belinda Balletomania, who has an obsession with ballet. By the end you’ll be pondering what your special talent may be and wishing for one of Tilda’s hats as well as looking forward to the next book in the series.

The author provided me with a copy of this book in exchange for my honest review.

For more about the author, read her post at Mother Daughter Book Club about the challenges of writing fantasy for children.