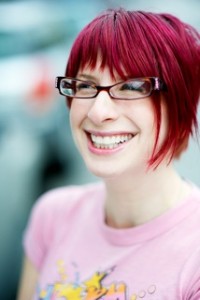 Yesterday I posted a review of Meredith Zeitlin’s new book, Freshman Year and Other Unnatural Disasters. Today, she’s here to talk about the writing life and her spunky heroine, Kelsey Finkelstein.

MZ: I’ve always just been one, really—since I was very little. I come from a family of writers and readers, and books were always everywhere. It sort of came naturally, I think. But my aunt Rhea (Kohan) is a novelist, and her books are hilarious. She definitely inspired me to try my hand at an actual book.

Why do you like to write fiction for young adults?

MZ: I guess I’m sort of a young adult myself, still; I’m a person who spends a great deal of time in PJ pants, watching cartoons and dyeing my hair crazy colors, after all. And I have never forgotten how it feels to be that age, and all the insecurities and excitements that go with it. I still feel them! I connect to tweens and teens really easily out in the real world—better than I do with a lot of “grown-ups,” if you want to know the truth. And while I love books in general, there’s something about literature that’s both nostalgic for adults and relatable for kids that’s really appealing to me.

What do you like best about being a writer?

MZ: Honestly, I just love putting words together. Making crisp or crunchy sentences that will maybe make someone else laugh, or think, or disagree… It’s so satisfying when you get it right.

What do you find most difficult?

MZ: Actually sitting down and doing it. I am the world’s worst procrastinator!

Tell us two interesting things that readers may not know about you.

MZ: Hmmm. Well, I’m a voiceover artist in my “real life,” so you might’ve heard me on commercials before you ever heard of my book—I’ve been doing that for almost a decade now. (You can check out www.mzspeaks.com if you’re interested in seeing my reels.) “The Music Man”—the original version, obv—is my very favorite movie musical. I love horseback riding. I can juggle. What else? I could easily live on ice cream. I’m learning to play guitar. (I’m not very good.) Oh—I have a pink flatscreen TV! It rules. Is that too many?

In Freshman Year and Other Unnatural Disasters, Kelsey is determined to change her image when she becomes a freshman. Do you think it’s hard for teens to change the way others perceive them?

MZ: I think it’s hard for anyone to change how he or she is perceived, really. What might make it even harder for teens, though, is that they’re still in the process of actually forming that first “not a kid anymore” version of themselves. How do they change something that is still so tenuous, especially when everyone around them is doing it, too? At the same time, it’s also a chance to try lots of different hats on—which can be exciting and confusing. I think the truth is, the only person who is REALLY noticing those big changes at that time in your life… is yourself. And you’re really the one you’re trying so hard to impress, even though it seems the other way around. You just don’t realize it til it’s all over, do you?

What do you think is particularly challenging for teens making the transition from middle school to high school?

MZ: I think the biggest change is going from being kings of middle school to getting stuck on the lowest rung on the high school totem pole. Kids who are used to being in charge simply by virtue of their age, no matter what their social standing, are suddenly the babies again, and that’s a scary position to be in. Feeling insecure can lead teens to make some choices in an attempt to solidify their position in a new place. Sometimes those are beneficial choices… but sometimes they aren’t.

Kelsey suffers quite a few embarrassing moments, yet she keeps her sense of humor through it all. Did you always imagine she would be so resilient?

MZ: Well, Kelsey is based on me and my experiences, so I guess the answer has to be yes, simply because that’s what I’m like. But a more complex answer is that I wanted her to be an example for young readers—to see that it’s okay to get knocked down, and that sometimes it can make you stronger.  It’s really important and so incredibly hard to achieve high self esteem at any age, but especially for tweens and teens. The pressure is enormous to fit in and succeed and look a certain way… I certainly struggled with it myself. Even Kelsey spends a lot of time with a million thoughts in her head, doubting her choices and (especially after the incident with Sam at the party) thinking bad things about herself. Kels is really lucky to have a supportive network of people in her life, which helps her keep her chin up and keep trying. I purposefully gave her a lot of obstacles so that readers could see her come out the other side, no matter how hard it was for her to do it. I think that any way I—or any writer—can get the message to teens that it’s okay to make mistakes, that NO ONE is perfect, that everything can be a learning experience… is worth exploring.

What do you think is an important issue brought up in the book that book club members may want to talk about?

MZ: Well, I hope there are a few! 😉  I think the various character relationships are really important, especially how some of them change over the course of the book—particularly within Kelsey’s group of friends. Another issue that’s come up a lot is the amount of “bad stuff” in the book—drinking, sex, peer pressure, etc. These are all important things for moms and daughters to try to talk about, however uncomfortable it might be. Do the daughters think the portrayal of a typical high school was realistic? Are the moms surprised/relieved/horrified by their answers? What about the different ways those elements are responded to by Kelsey and her friends? Which girl has the “right” idea?

Do you have anything else to add for readers at Mother Daughter Book Club. com?

MZ: Thank you so much for checking out this interview, and hopefully the book as well! The main reason I wrote this book, ultimately, was to put another character out in the world that would make some girl somewhere think: “Ok. I’m not the only one. I don’t have to be perfect, and I can still totally get through this high school craziness.” And I think that girl’s mom would want her to get that message, too.