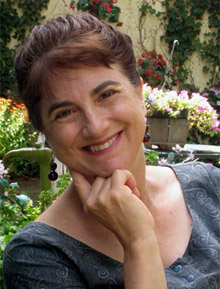 Emily Whitman is a Portland author whose latest book is Wildwing (see review). She’s also the author of Radiant Darkness. Here she shares thoughts about writing and Wildwing with readers at Mother Daughter Book Club.com. You may want to check out the question I ask her about whether it’s easier for someone who lived a century ago to adjust to life in the middle ages than it would be for someone today. She turns the question around and wants to know what readers think. Comment here if you have any thoughts about that.

MDBC: Tell us a little bit about what led you to being a writer?

EW: Books and the joy of words were everywhere in my house. I loved writing poems and making things up. If you could get a job rhyming, I’d be at the top of the ladder! But at some point in college I decided I was never going to be a “great writer,” so I just stopped. Stupid! Don’t do this! Many years later, when I was reading to my own children, the need to write reawakened in me. I started to see that writing wasn’t about a brilliant piece appearing ready-made out of the blue, but about finding my own voice and staying at it. I taped two sayings to my kitchen cabinet: “Your IQ is not as important as your I WILL,” and “The best is the enemy of the good.” In other words, don’t let the search for perfection get in the way of your writing—just write!

I joined a group of poets and got used to commenting on other people’s work and hearing their ideas on mine. That was a step in bravery. Then I started writing passages for educational publishers. That was another step. And then finally realizing the story I wanted to tell had to be a novel, and deciding I’d give it a whirl—that was a huge step. I don’t think I could have done any of it if I hadn’t learned to share my work in that poetry group. I still have to get brave every time I put something out into the world, and each time I’m surprised anew how great the rewards are.

MDBC: Addy strains against the social position she is born into. Did she have many options to change that position in the early 1900s when she was born?

EW: No. That’s one reason I set that part of the story in 1913. The social class you were born into is where you were expected to stay. Things were better than they had been—Addy could go to school—but her choices when she left school were few. Most women who worked were in domestic service, with almost no say about hours, wages, or conditions. Things changed with World War I. With so many men off to war, women had new options, working in factories, taking jobs that had been men’s. Now that maids were in short supply, they could demand better conditions. Education, opportunities for work—those are things that have made a difference in people’s choices since then.

MDBC: What sparked your interest in time travel?

EW: When I was in high school, there was a trail near my house that led to a path in the mountains. I used to walk along that trail and imagine that it was the 1800s. I’d avoid looking at my sneakers and blue jeans so I could pretend I was dressed in a gingham dress. I already had the long braids! After a while I started to invent the rules for a kind of time travel summer camp, where I’d get to live with a family in the past. I still think that’s a great idea. In college I read lots of 19th century novels and studied history, and those were also ways of immersing myself in another time. I like finding connections, the ways we’re the same in spite of our surroundings. And I like the shock of the unexpected, having to leave your preconceptions behind. Falling into the world of a book is certainly a form of time travel. So is dreaming, don’t you think?

EW: It wasn’t so much a decision as the way the story unfolded in my head. Now, looking back, I can say it’s because she ran away hoping for some kind of fairy tale of a better life, and a turreted castle is the perfect fairy tale setting. And she gets to play the part of the princess!

And then there’s the question of how people label us, the boxes they put us in, and whether we can be strong enough to face that and find a way to live as our fullest selves. In 1913, Addy’s at the bottom of the social ladder, crushed beneath the scorn of the other girls, with no way up or out. She arrives in 1240, a world that’s even more stratified than the one she left. But she figures that’s fine as long as she’s on the top, right? Right? Working with falcons, Addy starts to think about kinds of freedom. Can you be with other people, and still be free? Still think for yourself? Still decide for yourself who you are and what kind of choices you have?

MDBC: If you could choose a time to go back to, when would it be?

EW: This changes for me every time I’m asked! Ancient Greece (though that would be better if I were a man). Renaissance Venice. Today I’m tempted by the artistic world in Paris at the turn of the century, in Montmartre. Or maybe I’ll drop in on the 1920s, dance to some jazz, bob my hair. I look really good in 1920s hats.

MDBC: It’s seems easy for many of us to romanticize life in the past. Why do you think that may be?

EW: We get to choose which parts we look at, for one thing! In my story, Addy goes off to live in a castle. What if she ended up in a peasant’s household, without enough to eat, and constant, backbreaking physical labor? Maybe then she’d look back on her old life longingly.  Even in that castle, things weren’t all silk and furs. When Addy comes into the Great Hall, the old rushes are being swept out. What I didn’t say is they needed to be replaced because they were full of old bits of food and dog droppings. People had bad teeth and terrible breath. But putting all that in would make it a different kind of book than the one I wanted to write.

MDBC: Do you think it was easier for Addy, a child of the early 1900s, to adapt to life in the Middle Ages than it would be for a child of today?

EW: As I look at this question, Cindy, I find myself wanting to know what your readers have to say! Can we ask them? I find myself asking more questions. Do we expect to have more options in our lives, and would that make it harder for us? Are we as used to physical labor as people were in 1913? What about our assumptions in regard to faith and the role of the church? Have we grown so used to technology, it would be harder for us to live without it? (How about it readers? What do you think? Comment here to let us know.)

MDBC: What do you admire most about Addy?

EW: I like that she’s feisty and doesn’t give up. She doesn’t crumble under the scorn that’s heaped on her, or settle for having a life of being less than she knows she can be. I like that she’s brave and willing to take risks. And then I like that she grows enough to realize sometimes you have to sacrifice your own desires for what you believe in. I LOVE the part at the end where she’s finally able to face Caroline.

MDBC: Is there anything else you’d like to say to readers at Mother Daughter Book Club.com?

EW: If you’d like to see some discussion questions for Wildwing, you’ll find them here at Novelnovice.com (and soon I’ll be putting them on my website, www.emilywhitman.com). I’d love to hear what other questions or topics spark great discussions for your club—please email me and let me know. Keep reading, talking about books, and sharing what you think!