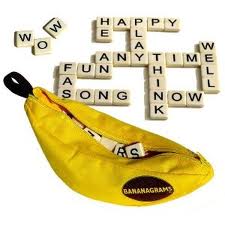 I love puzzles almost as much as I love books. When I see crosswords, Sudoku grids and word search puzzles, my fingers start to itch and I scan the clues even if I don’t have a pencil in my hand and don’t intend to solve it.

Solving puzzles is mostly a solitary activity, one I like to do on my own without input. So I was particularly please when I recently discovered a game that is like a puzzle for multiple players. It’s called Bananagrams, and you can play in groups of two all the way up to 7 or more, so it’s easy to be social while fulfilling your puzzling urge.

Here’s how it works. Each player gets a certain number of tiles, each printed with a letter of the alphabet. Each player then has to create words with their tiles in any combination they can come up with. It’s sort of like a cross between Scrabble and Boggle. Every word is distinct, but every player builds her own word puzzle instead of everybody building on everybody else’s words.

What I really like about Banaagrams is that you can change the words you’ve created as you go along. For instance, once when I played I built the word player into my puzzle. Then I decided I could use the “e” and “r” in another place to help me use more tiles. So I just took those two letters off and used them elsewhere.

It’s a creative way to keep you thinking about all the possibilities of which words letters can create. My husband, daughter and I had a great time playing Bananagrams. It took a lot of concentration at first, but once we got the hang of it, it was really challenging and a lot of fun. I also liked that there are no scores to add up or records to keep (you could add a scoring system easily is you’re competitive.) I recommend it as a family game or as an activity to add to your book club meetings.

The game comes in a bright yellow, banana-shaped pouch that’s easy to pack and take with you on a vacation. It also takes up very little room on your game shelf. I have seen Bananagrams for sale in many bookstores. You can also check it out on the company’s website: http://www.bananagrams-intl.com.