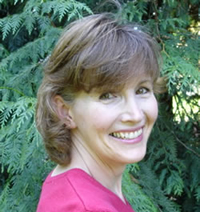 Heather Vogel Frederick’s fictional book The Mother Daughter Book Club, was reviewed in the last issue of my newsletter. She’s also written The Voyage of Patience Goodspeed, The Education of Patience Goodspeed, and the Spy Mice series. Lucky for me, Heather lives not far from where I do in Portland, so we were able to meet for lunch and talk about her writing, her love of reading and what’s next. (From an interview in July 2008.)

HVF: I’ve known it was what I wanted to do since I was six. My dad taught me to read when I was four. I got my library card as soon as I could sign my name and I can still remember going to the East Lexington, Massachusetts, library and very proudly getting my library card. It was another year or two until I realized that books didn’t just appear magically on the shelves.

How did you know you wanted to write books for children?

HVF: It was spring quarter, my senior year in college, and I needed one more credit to graduate. I was looking through the catalog when I saw a children’s literature class. I thought hey, easy A, this will be fun. That class changed my life. The woman who taught it was a children’s librarian, and a teacher and a writer herself. She had written text books about teaching children to read. I didn’t think of children’s books as something someone would aspire to write, but she reintroduced me to writers from my own childhood and new writers of that time. I remember reading The Dark is Rising by Susan Cooper and having an epiphany thinking this is great literature. From that moment on I knew that would be my niche.

But you started out writing as a journalist, not as a book author?

HVF: I went to work for the Christian Science Monitor. I started off as a copy kid and then became a cub reporter and an assistant editor and a staff writer. I wrote features. It was great training ground. I learned how to write on deadline. I learned how to interview people. I learned how to research. I learned how to be edited without having a hissy fit. All those things that professional writers know and understand. Eventually, when my son, Ian, was born I wanted to be home with him. So I worked out an arrangement where I became the children’s book review editor. At the same time I started freelancing for other organizations like Publisher’s Weekly magazine. I didn’t have much time beyond mothering and doing that to work on fiction but it was always there in the back of my mind, like little flames flickering away.

How did you come to write The Voyage of Patience Goodspeed?

HVF: When my youngest son was in first grade I finally had a little extra time. My initial foray was into fantasy, but it was just going nowhere. I was getting discouraged. On a different note I was doing some family genealogical research, and I called my great uncle Billy one day when I was tracing the family history. He said, “Do you know that your great great grandfather ran off to sea to be a whaler when he was 15 years old?” He sent me a bunch of material including a receipt for the whaling gear for a 15-year-old boy. I started reading about the American whaling industry and I found out that whaling voyages followed whale migrations while they tried to fill up the hold of the ship with oil. A lot of times they would be gone 3 – 5 years at a time. Since these captains were gone such a long time a lot of them brought their wives and raised their kids at sea. And I thought what a great setting for a children’s book. So that was the genesis of what came to be my first book The Voyage of Patience Goodspeed, which followed a 12-year-old girl who goes off with her dad and she learns to navigate.

You’ve written historical fiction, fantasy and current fiction. Why so many different styles?

HVF: They all seems to have connections to my life. There was the family connection with Patience. Spy Mice was an homage to my misspent youth, because I spent a lot of time watching spy-fi TV. The Mother-Daughter Book Club is set in my hometown of Concord, Massachusetts.

Do you feel a particular resonance with middle grade readers?

Why do you think it’s important to write for that age range?

HVF: There’s such a push in our world today to thrust our kids further than they need to be. Whether it’s in pop music or fashion or what they’re seeing in movies. I’m really whole heartedly for defending our kids, and maintaining that sense of purity that comes with childhood without being in such a rush to push them on.  Let them still be kids.

I understand you have two sons. What inspired you to write a book about mother-daughter book clubs?

HVF: The spark for the idea was from my editor. She called me up one day and said there are mother-daughter book clubs all over the country and wouldn’t it be fun to write a book about one. You could set it in Concord, your home town and have the club read little women. It sounded great to me.

So how did you take the idea and make it into your own story?

HVF: I was one of three daughters. I mined our rich childhood vigorously. I had a world class mother too, so there are strong mother/daughter connections there. But it is at the height of irony that I wrote a book with a pink cover.

HVF: It was fun. There’s a lot of things taken right out of my own childhood and adolescence. I got a chance to go back and re-visit and walk around the town. It’s such a beautiful place. I appreciated that even when I was living there as a child and young woman.

Do you plan to write more about the mother-daughter book club?

HVF: There will be four books in the series. The second one will be out in September. It’s called Much Ado About Anne, and the club will be reading the Anne of Green Gables Series.

What are your thoughts about real mother-daughter book clubs?

HVF: I think it’s the best idea that’s come down the pike in a long time, and I’m incredibly jealous that I don’t have a daughter. Because I’d start one in a heartbeat. I know a group where the girls are in college and when they come home for the holidays they still want to have book club meetings. It’s truly special to have something like that to share and look back on. Even with my sons, we did a lot of reading together growing up as a family. Bonding over books is something that helps create a very strong connection.

I understand you’re willing to meet with mother-daughter book clubs?

HVF: Yes, and I’ve met with clubs both on the phone and in person. I think it’s a fun way for the moms to visit and the girls to interact. And it’s been really great for me to get feedback from book clubs across the country who say we loved your book and now we’re going to read Little Women. It makes me so happy to spotlight books like this and help keep them alive.

If you’d like to contact Frederick about meeting with your book club, send her a message through her Web site at www.heathervogelfrederick.com.