Judy M. Miller is an adoptive parent and adoption advocate living in the Midwest with her husband and four children. She has mentored prospective adoptive and adoptive parents for over a decade about adoption—its joys and issues. She is a member of Adoption Voices (moderating a group for parents of tween and teen adoptees), AdoptionParenting, AdoptionParentingTweens, Families with Children from China, and Our Chinese Daughters Foundation.

Judy is a columnist for the adoption network, Grown in My Heart. Her essays and articles appear in adoption and parenting magazines. Judy’s stories are featured in A Cup of Comfort for Adoptive Families (Adams Media), Pieces of Me: Who Do I Want to Be? (EMK Press), and Chicken Soup for the Soul: Thanks Mom (Chicken Soup for the Soul). She recently presented on “Finding Our Stories Online” at Story Circle Network’s Stories of the Heart. Judy facilitates classes for adoptive parents of tweens and teens at Parenting Your Adopted Child: Tweens, Teens and Beyond.

I became acquainted with Judy last fall when she hosted me on The International Mom’s Blog. I’m happy to feature more information about her and the work she’s doing for parents of adopted children. Here she talks about a new class she’s created to help parents with their adopted tweens and teens.

What prompted you to create a class on parenting adopted children?

I was moved to create Parenting Your Adopted Child: Tweens, Teens & Beyond for several reasons, but the main reason was that many parenting classes target waiting parents or parents who have recently adopted infants and young children.  There are few classes for adoptive parents of kids entering tweens and teens.

I also found that as I became a more experienced adoptive parent, I had countless requests for my “expertise” for over a decade and fell into a mentoring role for other adoptive parents and parents beginning the adoption process. I believe we glean the most from our own tribe, from collective experiences as adoptive parents, adoptees, and birth parents. Parenting Your Adopted Child: Tweens, Teens & Beyond was created in this spirit.

Who would be helped by your class the most?

Parenting Your Adopted Child: Tweens, Teens & Beyond is for parents who have children between the ages 6 and 18. During these years kids begin to understand what they have gained and lost by being adopted. Parents find themselves challenged with a lot of questions as in “Why did my birth mother give me up?” “What did I do to be given up?” and “Why did you adopt me?”

I even have one parent who is considering taking the class now even though both of her children are under the age of five. This parent wants to be proactive, prepared as much as she can be. She sees this class as the next step in parenting her adopted children. I think it’s always a good idea to be as informed and prepared as you can be as an adoptive parent.

Aren’t there already ample resources available on this topic?

Wonderful books, articles and resources are on parenting adopted teens are available, but reading takes time and digesting the facts takes even more. Many adoptive parents don’t have the benefit of having the “conversations” with other adoptive parents, who best understand what they and their child are experiencing. There are a few online classes for adoptive parents of adolescents, with little, if any, interaction with the other adoptive parents in the group. And, of course, there are online forums, but discussions there tend to go off on tangents and are not private.

Although I have a library of resources to draw from, my preference has always been to connect with others in the adoption community—adoptive parents, well-seasoned adoptive parents, and older adoptees for insight and perspective. So, I’ve created an e-mail class that offers the benefits of all the resources, my experiences parenting four kids, and the wisdom of the group.

If someone has never taken an e-class before, can you explain what they can expect in terms of their time commitment to the class?

I send course material out weekly via Microsoft Word Document. The workbooks cover different topics related to parenting the adopted tween/teen. The beauty of the class is that participants meet each other virtually through the class introduction and sharing of weekly class work. Participating parents do weekly assignment at their convenience, when it fits into their busy life. The weekly time commitment is only a couple of hours per week but, of course, the parents can reflect on what they are learning and discussing as much as they like. The class lasts six weeks and the class materials can be referred back to as needed in the future.

The next Parenting Your Adopted Child: Tweens, Teens & Beyond begins April 7th. Class is limited to 12 participants. Parents can find out more and register here. http://judymmiller.com/. 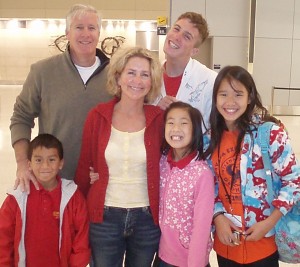 Judy Miller with her family