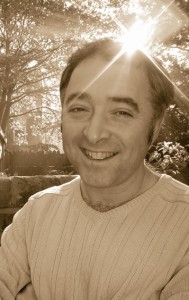 Before writing Millions and Framed for young audiences, Frank Cottrell Boyce was already a well-known screenwriter, with scripts for Welcome to Sarajevo and 24 Hour Party People, among others, to his credit. But many people are glad he turned his pen to writing children’s books that are truly delightful for all ages. Boyce uses humor to help the life lessons sprinkled throughout the pages of his work go down easy, and his characters have a way of lingering in your memory long after the book is finished.

Boyce recently took time to answer questions in an e-mail interview for MotherDaughterBookClub.com. Here he talks candidly about writing, his characters, and new works to look forward to. (From an interview in April 2007)

How did you become a writer?

FB: How or why? I can remember the day that the decision was made. I was in year six (so I’d be 11) and we’d been given a piece of class work to do about Vikings. It was a lovely fresh February day and for some reason I decided that I’d make a bit of an effort with this piece of work. I put some jokes in and some nice adjectives and I illuminated the first letter making it look like the figurehead of a longboat. My teacher was a nice old nun called Sister Paul. She collected the work and the moment she picked it up I could tell she knew something was going on. After break she read it out to the whole class. I wish I could remember the jokes now but they must have been good because everyone laughed all the way through and that was a wonderful feeling. I imagine it’s the feeling you get when you win a race or something. If she’d asked me to read the piece out myself I probably would have wanted to become a stand-up comedian but there was something delicious about being able to sit back and watch her get the laughs. She was bright red by the end and her eyes were all twinkly. It was as though she’d briefly become one of the children, she was enjoying herself so much. I felt like a magician. And all I’d done was played about with the word order and thrown in a couple of unexpected metaphors. I’ve spent the rest of my life trying to regain the unexpected magic of that morning.

The main characters in both Millions and Framed are young boys. Why is that?

FB: Oohhh. I’m not sure really. In Millions it just worked out that way – it felt like a story about brothers. Then when I started getting letters and messages from people a huge number said the same thing – i.e. “my little boy would never read books but he read this one.” There is a problem in England about getting boys to read so I suppose in Framed I consciously decided to write something that boys would like but that wasn’t necessarily car chases and guns.

I believe you have seven children; how many are boys?

Are you planning anything that will feature girls as main characters?

FB: Well I think Minnie is one of the best characters in Framed—she’s certainly taking up a lot of room in the screenplay.  And there’s a very vibrant girl called Florida Digby in my new book—Cosmic.

Do you talk to your children about ideas for your books?

FB: Yes. But they’re very harsh. I read my new book to them at Christmas and they hated it so much I had to start again. My ten-year-old son loves Millions and can more or less recite the first chapter.

Do you base your characters on people in your life?

FB: Not consciously but afterwards I recognize certain things about them. For instance Dylan is lonely for male company and my ten year old is just the same. He has three brothers but two of them are much older and one of them is a lot younger. So he has no one to play football with except me. So I guess there’s a lot of Dylan in him. Also because he has older brothers and sisters, he has a big vocabulary that he doesn’t necessarily understand. So I think a lot of Anthony’s talk about mortgages and tax relief etc. comes from that.

You wrote both the book and screenplay for Millions. Are you happy with the way the movie turned out?

FB: Well the movie took a lot more time that the book and we shot it over a glorious summer near my home in Liverpool. I’m in the film! I put so much of myself into the film that I can’t judge it at all. When I watch it now it’s like watching a home movie of a particularly happy time.

What would you do if you suddenly got millions of pounds?

FB: I would like to think I would be like Damian but I think there’s a bit of an Anthony in all of us. Seriously WaterAid is a great charity and some of the profits from both the book and the film go there.

The character Damian in Millions is a devout Catholic. Does religion play an important role in your life?

FB: Well I’m a Catholic too. I guess there’s a lot of me in both Damian and Anthony—I think if you add them up (or subtract one from the other?) you get me.

In Framed, Dylan unwittingly stumbles onto some of the greatest art in the world. Are you a big fan of art?

FB: I think so. My Mum and Dad used to take me to the local art gallery a lot (it was free!) and of course since becoming a filmmaker I’ve really learnt to appreciate people who can tell a story with pictures. Except in a film you get 25 pictures per second to do it with and if you’re a great artist you can do it with one picture.

I understand that Framed is being made into a movie. Did you write the screenplay and when can we expect to see it?

FB: I’m writing the screenplay and hoping it will be shot next Spring for broadcast the following Christmas. (Note: The film debuted in Great Britain in December 2009, but no word yet on a U.S. show time.)

Do you prefer to write books or screenplays?

FB: Screenplays are a lot easier to write but the politics – the meetings, the money etc. – of filmmaking is horrendous. It’s much easier to publish a book than to write a film – partly because even a small film costs millions.

Who would you recommend read your books?

FB: Anyone and everyone! I think because the books are narrated by children, adults read them differently. I think adults find them funnier and children find them more moving.

What are some of your favorite books to read?

FB: Blimey. so many. I love E. Nesbit’s books—Phoenix and the Carpet, Five Children and It, Railway Children and The Treasure Seekers. She’s my hero really. But I’m reading War and Peace just now and it’s astonishing how good it is. I had no idea.

What’s the best part of being an author?

FB: Being able to work in bed. And also reading to children in schools.

What’s your next project?

FB: I’m working on the films of Framed and of Terry Pratchett’s Truckers. And I’m finishing my next book (Cosmic note: released in July 2008)

Is there anything else you’d like to say to readers in mother daughter book clubs?

FB: Keep it up. I think sharing books with someone can be really special. I’ve got a son who is living in rural Peru at the moment on a project for poor people. And I’ve decided to read all the books that he is reading – he took great big fat books with him because he has no phone, no TV, no radio and is living with a family. So once a week we email each other about where we’re up to. It’s hard to keep up with him but I’m loving trying.  That’s why I’m reading War and Peace. I don’t think we’ll ever forget doing that together.