↓
Home Menu ↓
Home→Genre→Contemporary Fiction→Book Review: What I Leave Behind by Alison McGhee
Tweet 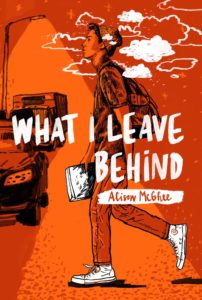 When Will needs time to think he walks. And he has a lot to think about: his dad’s suicide, his best friend’s rape at a party after he left early, his boss at the Dollar Only store where he works.

Walking helps him process his grief. It also brings him in contact with others who help him see the world in a new light — a young boy who believes in magical butterflies, a homeless man who accepts Will’s offer of food.

Eventually Will discovers that walking will take him only so far, and reaching out after his friend’s attack could require his biggest step of all.

Alison McGhee’s What I Leave Behind presents hope for those experiencing grief, depression, or others kinds of emotional struggle. Told in 100 chapters of 100 words each, the story has a lyrical feel, enhanced by references to David Bowie’s Space Oddity and lines from other popular songs from the 1970s. It also refers to the concept of 100 Chinese blessings, and how choosing a blessing for a friend who is suffering can help the giver as well.

What I Leave Behind is a quick read that invites a second reading and may inspire longer-term thought about an individual’s place in the world as well as among friends and family. I recommend it for readers aged 14 and up.