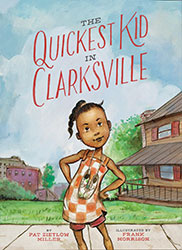 Alta runs fast, just like her idol Wilma Rudolph, an African American sprinter who grew up in Alta’s hometown of Clarksville, Tennessee, and won three Olympic gold medals. But when a new girl named Charmaine with fancy running shoes moves to town, Alta wonders if her own holey-sole shoes will be her downfall. The two compete to see who can run fastest and end up mad at each other.

The girls make up and become friends when they have to work together to carry a banner to a parade to honor Wilma.

The Quickest Kid in Clarksville, written by Pat Zietlow Miller and illustrated by Frank Morrison, shows two young girls bonding over their mutual admiration for their hometown hero. An author’s note at the back of the book emphasizes why Wilma Rudolph was a great role model for young black girls.

Rudolph grew up in a racially segregated town with separate schools, doctors and restaurants for black people and white people. After she won at the Olympics, Clarksville wanted to schedule a parade and a banquet in her honor, but she wouldn’t agree to attend unless the events were open to everyone. Organizers agreed, and the celebrations were the first major events for blacks and whites in Clarksville history. More historical information about Rudolph is also included in the author’s note.

The Quickest Kid in Clarksville is great for children of all races both because of its historical perspective and because it shows kids learning to work through conflicts to find common ground and become friends.