Yesterday I reviewed Rabbit Cake, Annie Hartnett’s first novel. Told through the eyes of an 11-year-old girl who’s family is learning to copy after her mother dies, Rabbit Cake has all the elements to make a great book-club book: issues to discuss, a story that is sometimes funny and sometimes heartbreaking, and a memorable protagonist with an evolving perspective on the world around her.

Today I’m happy to feature an interview with Annie Hartnett, where she talks about a girl named Elvis, discovering things about your parents, and vegetarian-friendly rabbit cakes. First, here’s a bit of a bio: 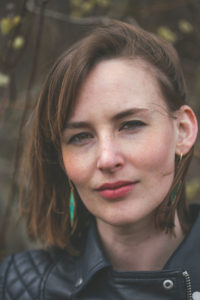 Annie Hartnett was the 2013-14 winner of the Writer in Residence Fellowship for the Associates of the Boston Public Library and has received awards and honors from the Bread Loaf School of English, McSweeney’s, and Indiana Review. Hartnett received her MFA in fiction from the University of Alabama and an MA from Middlebury College’s Bread Loaf School of English. Rabbit Cake is her first novel. www.anniehartnett.com

And now, her interview with MotherDaughterBookClub. com.

Why did you decide to tell Rabbit Cake through the voice of eleven-year-old Elvis, instead of her teen sister or her dad?

AH: I did write one very early iteration of the story from the mother’s perspective—but once I tried it from Elvis’s perspective, the story was hers. And I added an older sister because I always wanted one myself (apologies to my two brothers for that wish!).

It’s also more interesting to me to tell the story from Elvis’s perspective because Elvis doesn’t quite get everything about the adult world, the way an adult would. Lizzie picks up on certain things much faster than Elvis does, and it’s fun to watch Elvis puzzle out adult relationships, particularly romantic ones.

How did you come up with the name Elvis for a girl?

AH: I was obsessed with Elvis Presley as a kid, ever since a visit to Graceland when I was seven years old. Because I so strongly associate Elvis with my own girlhood, it made perfect sense to me.

I’ve since learned that there are women named Elvis! My parents’ favorite restaurant, a little Irish pub called O’Hara’s, was originally owned by a woman named Elvis. I would have loved to meet her, but I think she’s dead now. I bet she was a force to be reckoned with—how could she not be, with a name like Elvis.

Elvis discovers things that she never would have guessed about her mom. Can you tell us why you think people are so willing to talk to her about incidents they may have preferred to keep secret?

AH: Oh, I guess because Elvis is kind of quiet…sometimes when you’re talking to a person who does more thinking than talking, you end up doing more sharing than you really should. Elvis is also a very sweet, sensitive person, so even though she might say something odd to make you feel better, she will try to make you feel better. Like when Elvis tells her older sister not to worry about peeing on the houseplants while she sleepwalks, because that’s something a female wolf would do. Not very helpful, maybe, but sincere.

Without giving too much away, can you comment on how her discoveries change the way she views her mom, her dad, and her sister?

AH: Well that’s part of what the book is about—how our perspective of our parents changes as we age. It starts around Elvis’s age, ten or eleven, that you realize your parents aren’t completely perfect. Which is both horrifying and comforting. It helped me to know that my mother wasn’t perfect, and that she didn’t really expect me to be perfect either. Really, all my mother ever wanted was for me to be happy, and she was okay with most of the mistakes I made because she’d made them too. But she did ask me never to pierce my nose. She hates nose piercings. She likes my tattoo.

What makes you hopeful for Elvis and her family as life goes on for them?

AH: I think Frank Babbitt really steps up as a parent by the end of the book. I think Eva, the mom, took care of a lot of things in the house, and there was a lot he didn’t have to think about in terms of childrearing when she was around. Once Eva dies, he really fumbles around for a while, but ultimately he figures it out.

AH: For those wondering about the title, rabbit cakes are vegetarian-friendly. No rabbits were harmed in the making of this book. I’ve been a vegetarian since I was six years old—my mom thought it was a phase, and she accommodated the phase, but it stuck…it’s been twenty-four years since I last had a Slim Jim (that’s the only meat product I miss).

I hope you enjoy Rabbit Cake, and I’d love to see you at some point on the tour! (Check out her tour schedule here.)