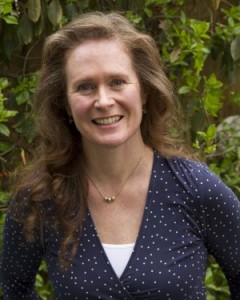 Kate Hannigan grew up in Tulsa, Oklahoma. She worked on school newspapers through high school before going on to study journalism in college and working for newspapers in different parts of the country. She lives in Chicago with her husband and three kids. Hannigan is the author of the Cupcake Cousins books and The Detective’s Assistant (see my review). Here, she share with readers what prompted her to be a writer, why she likes writing for young readers, and more.

KH: As a little girl, I would tell people I was going to be a writer. Books seemed so important, and I liked the sound of it all – though my 10-year-old self had no idea what it meant. I spent a lot of time world building during imaginary play, and I wrote down favorite names in my journal all the time. I think I’ve always like the power to name people and places!

All my life, I have been drawn to family stories, and I loved hearing my parents, grandparent, aunts, and uncles telling great tales of living in Ireland and Philadelphia. So maybe that’s where the love of historical fiction comes from. I remember sitting under the table at a very young age and just listening to their voices, their laughter, and imagining my grandparents as young people.

When I got into middle and high school, I really loved when we studied grammar and the mechanics of writing. So it all started to come together when I began working on school newspapers, then journalism classes in college. I went on to work in newspapers before turning to creative writing.

What is your favorite thing about writing for young readers?

KH: They’re so open! Young readers aren’t jaded or cynical about life. They’re earnest, and they look for truths – how we treat each other, what it means to be a good friend, how we can make things better. I love being around people and characters who embrace that!

What do you find the most challenging?

KH: It’s challenging to hit the right spot that is not condescending or speaking down to readers, but at the same time doesn’t treat them as adults. Somewhere in between there is the voice that resonates with young readers. I think it’s a balance, of respecting young readers – that they know a lot and are very savvy about things – but also recognizing that they are still kids!

Nell in The Detective’s Assistant has such a strong voice. What inspired you to create a character like her?

KH: I had a lot churning in my head as I created Nell. But first and foremost was making it clear that Nell is a GIRL! Of course she would be brave and clever, but I was not going to make her a girl who wants to be a boy or feature stereotypically boyish traits like refusing to wear a dress or loathing anything feminine. I wanted to make it clear that a character can be girlish AND smart and clever, that those are not mutually exclusive things.

And I wanted to put Nell and her aunt at the center of the action, not tsk-tsking on the sidelines. Often in books and films, the boys get to have all the fun. The girls are portrayed as more reserved or delicate or tangential, and they get shunted off to the side. But with this story, I thought it was important to show Nell and Kate Warne as dynamic, the problem solvers, the clever thinkers, the capable actors. THEY are the ones having all the fun!

And as to her voice, in the sense of expressions and speech, well, I think my upbringing in Oklahoma might have come through in a few turns of phrase.

Nell’s Aunt Kitty is based on a real person in history, why were you interested in including Kate Warne in your fictional story?

KH: I had never heard of Kate Warne when I first came across her name. The first woman detective in America? How cool is that? Right away, I wanted to learn more about her. But also, I wanted kids to know about her too. Often we hear stories only about the amazing men of American history. There were loads and loads of women and people of color who were doing remarkable things too, but their stories were often overlooked or simply discounted. So I felt like it was important to present Kate Warne and the cases she was involved in, to intrigue young readers to look for other fascinating women to learn about too.

How long did you spend researching the real events that went into The Detective’s Assistant?

KH: Years! I began by reading tons of adult non-fiction about the Pinkertons, the Baltimore Plot to assassinate Lincoln, and life in mid-19th century America. I also immersed myself in fiction from the era, like Harriet Beecher Stowe’s “Uncle Tom’s Cabin” and other books that could give me a sense of the way people spoke and dressed and ate. I read books about the history of underclothes, life in a boardinghouse, photography from the 1800s. I think I began all this in late 2010, contacted the Library of Congress for Pinkerton’s records in spring 2011, had a working draft of the book (still researching!) in spring 2012, landed an editor in spring 2013, and turned in the final version of the book in spring 2014. Now it’s publishing in spring 2015. Phew!

What do you hope readers remember after reading your book?

KH: I hope readers remember the fun. There’s lots of American history in this book, so I hope it gives kids some interesting context to wrap around important dates. But I wanted to write the type of book that I love to read: accounts of women doing remarkable things, told with humor and suspense! And I hope that readers remember Kate Warne and realize there were lots of other women forgotten by history, and that they might be the ones to discover them and share their stories too!

KH: Read everything! Seed catalogs, graphic novels, cookbooks, musty old biographies, as well as great fiction and non-fiction! I’ve been enjoying books side-by-side on the pillow with my three kids since they were born, and it’s one of my favorite things to do. Sometimes, we get six of us in the bed at night – all five humans and one happy dog – to read the bedtime book and talk about what’s happening. It’s a special experience to share a book with someone you love.

I hope readers will stop by my website at KateHannigan.com and say hello. There is lots more information about The Detective’s Assistant and Kate Warne, and there are discussion guides as well. Thanks for your interest!