Yesterday I featured a book review and giveaway of the newest book in Colleen Gleason’s Stoker & Holmes series. Today, the author drops by to answer a few questions for readers at Mother Daughter Book Club. com. 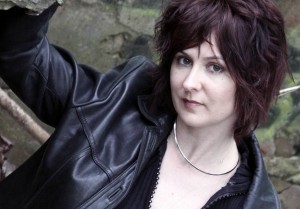 The Spiritglass Charade is the second in your Stoker & Bram series, following The Clockwork Scarab. What did you find most challenging about writing a sequel?

CG: I would say that the most difficult—but yet most important part—of writing the sequel was to make sure both main characters showed some sort of character growth. They have to change somehow between the beginning and the end of the novel, and they will have to continue to change throughout the rest of the series (a planned five books). So not only am I working on significant character development for one character, as in most books, I really have to focus on two of them. So it’s twice the fun!

What did you like the most about writing the sequel?

CG:  I loved revisiting the girls and the other supporting characters (Dylan, Pix, Grayling). With each book (I just finished writing the third), they become more familiar, and I learn more about each of them—and about their world. It’s like a discovery and I just love it.

And then there is the whole aspect of creating a steampunk amusement park, which I do in the book. While we don’t spend a lot of time there, the concept is introduced and I can tell it’s going to be a lot of fun to revisit it in future books.

Spiritual mediums and séances to contact the dead play an important role in the book. Was there a particular reason you chose to make them part of the story?

CG: Séances and spirit-talking were such a fad in Victorian times that I thought it would be fun to incorporate such a popular topic in the story. As well, it fit with my two characters and their backgrounds: Mina, who of course doesn’t believe there is such a thing as a ghostly presence, and Evaline, who—being a vampire-hunter—is very open-minded. So not only was it relevant to the time period, it also worked really well for their characters and their interaction.

How do you see Evaline and Mina evolving in their partnership?

CG: They are evolving in what I hope is a natural fashion—from competitiveness and mistrust of the other along with the desire to do things “her” way, to grudging admiration and the beginning of a respectful connection. Maybe they will someday consider themselves friends, and not merely partners. I do think each of them has learned to accept and respect the other’s skills—and maybe to even begin relying on that by the end of this second book. There is also an important moment at the end of the book that will really change the way they think about the other.

You mentioned there are five books planned for the series. Can you tell us anything about what to expect next?

CG: In the third book, tentatively titled The Chess Queen Enigma (Oct 2015) our heroines will find themselves looking after a princess from the country of Betrovia and on the hunt for a lost chess queen. The Ankh will return in this story, and, I’m sorry to say, there will be two deaths. But at least we will see more of Angus, and the girls will attend a ball.