Yesterday I featured a review of The Scar Boys by Len Vlahos. Today, I’m featuring an interview and a book giveaway as part of Vlahos’s blog tour. If you’d like , leave a comment about something that appeals to you in the book description or something Vlahos says in the interview that resonates with you. Please note: The giveaway is closed. Congratulations to Denise on winning. 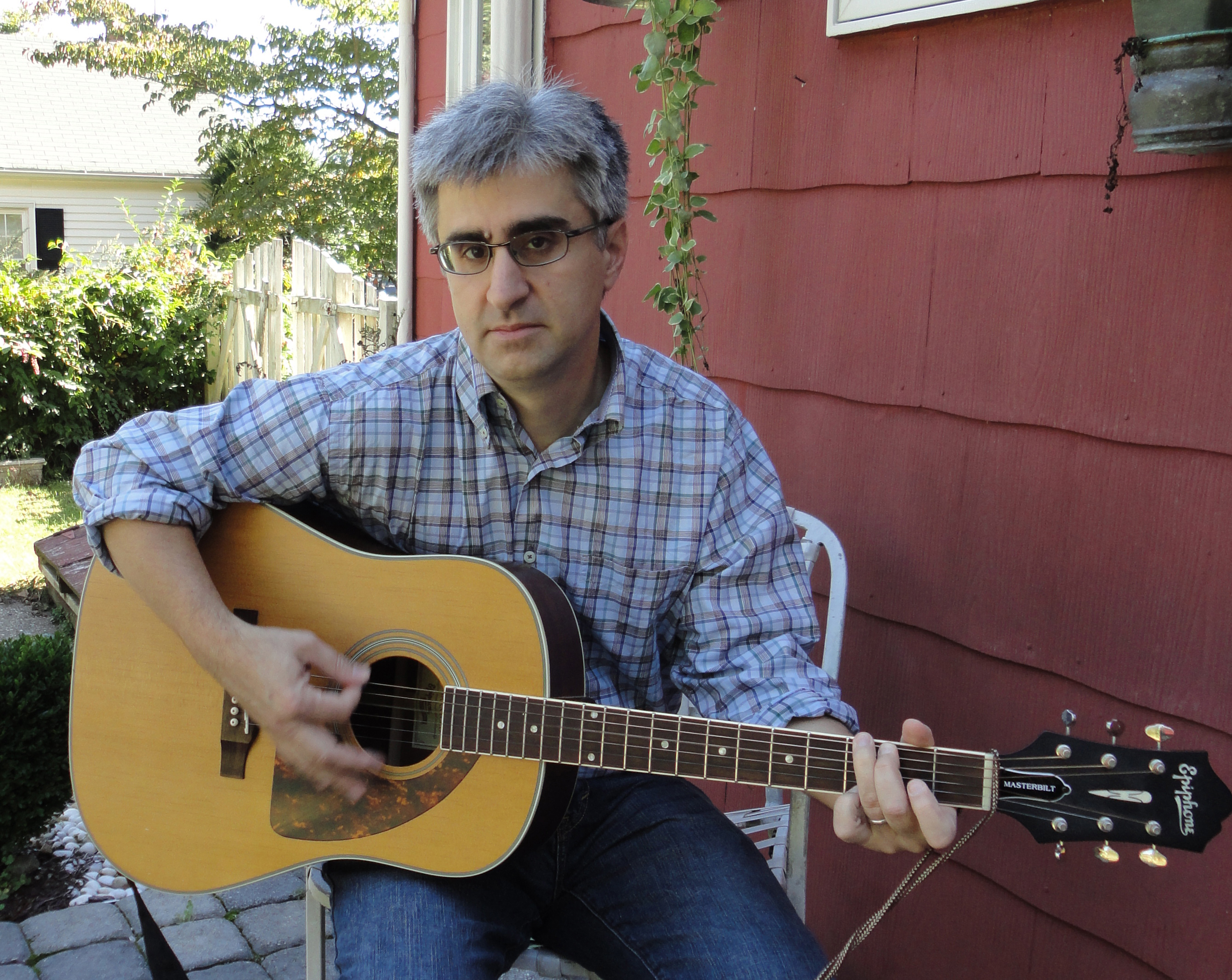 Len Vlahos photo by Kristen Gilliganplease) leave a comment below about something that resonates with you from the story description or the interview. Be sure to comment by midnight (PDT), February 4.

Here’s a bit of information about the author:

Len Vlahos is the Executive Director of BISG (Book Industry Study Group) and the former COO of the American Booksellers Association, where he worked for the past 20 years. Len has also worked in numerous bookstores, was an on-air personality for a commercial radio station in Atlantic City, and worked for a time for Internet marketing guru Seth Godin. THE SCAR BOYS is his first book. You can visit him online at www.lenvlahos.com and on Twitter @LenVlahos.

Find him on his blog tour at these sites:

Rock on with THE SCAR BOYS playlist on Spotify: https://play.spotify.com/user/egmontusa/playlist/7yb3rYWaA4APBSkLdcm9WK

Now for the interview:

LV: I’ve been writing since high school, so it’s really just a part of who I am. The first time I remember being really proud of something I’d written was in tenth grade English class. It was a satire of Sesame Street, and, as this was the 1980s, it was pretty risqué. Bert and Ernie were a gay couple living together, the Count was teaching children to county by loading bullets into his gun, that sort of thing. It was meant to be controversial, a bit confrontational, and funny. My teacher was open-minded enough to get it, and she gave me both encouragement and a good grade. (I wish I still had the piece!) Two years later, under the tutelage of my awesome twelfth grade English teacher (Richard Sturdeyvant), I had progressed to writing sonnets. Go figure.

Since then, I’ve tried my hand at everything—short stories, essays, screenplays—but nothing was good enough to share with others until The Scar Boys. I’ve also written a LOT for my day job over the years. Here’s a sample:

And of course, from the time I was thirteen to now, I’ve written hundreds of songs. A few of them are even good.

LV: Your teenage years and early twenties are an amazing time of life. It’s when you and the world sort of figure each other out. Those years are steeped in conflict and rife with opportunity, which is perfect for a writer.

Writing about people in their 40s (like me) is just less interesting, though I’ve done a fair amount of that, too. I’m also fascinated by the relationships between teens and adults, how there seems to be a genetically coded obstacle to getting along. (Who knows, maybe it’s an evolutionary thing that helps push kids out of the house and into the world?

What do you think the challenges are?

LV: The biggest challenge is getting the voice right. As much as I like to believe I’m still a kid on the inside, I’m not. Having a teenage character ring true to other teens (as I hope Harry and his friends do) requires good listening skills, and the ability to step out of my own skin and see the world through someone else’s eyes. It’s a challenge, but a really, really fun challenge.

How did you decide to tell the story as though Harry is writing a college entry essay?

The truth is, I kind of stumbled on it. For some reason, when I’m writing in the first LV: person, I need the narrator to have a reason for talking to the unseen audience. In one early draft Harry winds up in jail and he’s telling his tale to a parole officer. In another, he’s talking to a music journalist. (The earlier drafts had a very different ending.) Neither really worked. When I stumbled onto the college essay, it just sort of clicked.

You portray Harry as someone who experiences multiple issues because of his scars. But you also show the side of him that shares many of the same traits as any teen. How did you find the right voice for Harry to portray both those aspects of himself?

LV: This was the most gratifying part of writing Harry’s character. I wanted to use his scars to make him feel isolated and alone. Those are feelings shared by just about every teen (most adults, too), even though in Harry’s case they’re particular to his situation. I needed him to be in a dark and lonely place to allow the story’s hero (music) to swoop in and save him.

What would you say is Johnny’s motivation for befriending Harry?

LV: I very consciously wanted Johnny to be a complex character. Johnny has enough confidence to go outside the box in terms of his friendships, and initially, he simply finds Harry interesting. Later, we see that Johnny also has a need to be adored, and he reduces Harry to the role of a sycophant. I don’t think he’s really doing it on purpose. In other words, Johnny, like most people, is motivated by a complexity of emotions, some good, some not.

And remember—and this is important—we’re seeing Johnny through Harry’s eyes. At the very end of the story, Harry realizes that he’s been viewing Johnny (and the rest of the world) through lenses colored by his own bad experiences. It’s this realization that allows Harry to grow.

What does it mean to Harry to have a friend who seems to accept him as he is?

LV: It means the world, the entire glorious, wonderful world.

Harry’s scars are both physical and emotional. How does having one help him deal with having the other?

LV: I think it’s just the opposite. The emotional and physical scars amplify one another, often bringing Harry to a state of near paralysis. When Harry meets Gabrielle on Halloween night, he’s able to come out of his shell and be charming because a costume has hidden his scars. The next day, without the costume, when his physical and emotional damage (“scarred on the inside and scarred on the outside”) are laid bare, he reverts back to his timid, unhappy self. It’s the double whammy of psychological and physical pain that keeps him down for so long.

Music plays an important role in the emotional lives of many people, especially teens. Why do you think this is?

LV: Oh, wow, that’s a big question. Music, to me, is a kind of magic. It can make a person—and you’re right, especially a teen—feel every range of human emotion in just four bars. It can get inside your head, find its way to your gut, stretch out to the tips of your toes and fingers, and settle in your heart. There are songs that I heard for the first time thirty years ago that still, to this day, make the hair on my arms stand up. Case in point:

Knowing how to play an instrument makes it that much more special. Every kid should take a year of piano, or guitar, or flute, or whatever. It really would make the world a better place.

LV: Yes, two things: Thank you for inviting me into your world, and I hope to see you on the book tour!