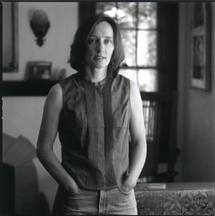 How did you decide you wanted to be a writer?

I started to write—poems at first—in junior high, 7th or 8th grade. I had a series of teachers who taught poetry and encouraged writing, and I found that writing things down, and turning my daily experience and my emotions into stories or poems, was enormously satisfying. E.M. Forster wrote, “How do I know what I think until I see what I say?” That rings true for me: writing—even when I’m inventing characters and events I’ve never experienced—is a way of sorting out and understanding my thoughts.

What do you like most about the work you do?

I love those moments when the writing is going well, and I feel entirely lost in a story; I’m talking to the characters, moving through the world with them, and thinking about what they’ll say and do next.

Um: the other moments—and there are many of them—when the writing is *not* going well, and I’m crossing things out and thinking about what might be in the refrigerator.

You’ve written books for both adults and for teens. Do you feel there’s a big difference in how you approach the different audiences?

For me, there’s very little difference. I often write about teenage characters even when I’m writing for adults. The main distinction, I think:  adult readers don’t object when the writer goes off on a tangent and the narrative wanders; kid readers more often prefer books in which the plot ticks along at a smartish pace—with not as much wandering about.

In The Unbearable Book Club for Unsinkable Girls, your characters are in a book club with their moms. Have you been in a mother-daughter book club or another type of book club before? If so, did that have an influence on the story you wanted to write?

I wish I had been! I don’t think my daughters ever invited me. There was probably a mother-daughter book club in the neighborhood they didn’t tell me about.  I *am* in a book club, though—we’ve been meeting once a month for 23 years.

Adrienne and the other girls in the group aren’t really friends, and they don’t want to be in a group with their moms. How did you decide to create a book club that starts with conflict?

One of the more interesting ways to define characters and plot, I think, is to put a group of people together who don’t particularly *want* to be together. Then you can figure out how they’ll react. To me it seemed natural to start a book about a book club by quickly establishing that the members of the group didn’t want to be members.

As the girls meet during the summer, they read five books that they will discuss later in their 11th grade AP English class. How did you choose the books the girls would read?

This was hard. There were so many choices. First I decided that they should read books written by female authors. Then I decided that, since the events in the book take place in summer, they should be choosing from a “recommended” list created by their 11th grade English teacher: books that would be interesting to discuss in an informal group and/or during a class.

Why do you think Adrienne is so willing to do the things CeeCee asks her to do even though she doesn’t think she should?

Oh, Adrienne. Sometimes I wanted to shake her. But I also identify with her feeling that she doesn’t know who she is—that while other people are striding confidently through the world, completely sure of themselves, she’s a shapeless blob, an amoeba. She’s attracted to CeeCee because CeeCee radiates confidence, and Adrienne wishes she could have some of that attitude and confidence for herself.

What main issues brought up in The Unbearable Book Club for Unsinkable Girls do you think would make for good discussion in a real-life mother-daughter book club?

Oooh, let’s see. How about:

—Can books change people’s lives or make them better human beings? Or are they designed for escapist fun?

—Can a book that you don’t enjoy still be a good book? An important book? How can you tell?

—Adrienne’s mother is “open to questions” on any topic, but Adrienne begins to feel they don’t know each other. How can mothers and daughters best talk to and relate to each other at different ages/stages?

—Do CeeCee and Jill and Wallis and Adrienne benefit by being members of a book club?  In what ways?

Summer is almost here. Hit the library. Head to the bookstore. It’s time to open the covers of a good book and dive on in.