↓
Home Menu ↓
Home→Author Interviews→Interview With Uma Krishnaswami, Author of The Grand Plan to Fix Everything
Tweet

Yesterday I featured a review of The Grand Plan to Fix Everything by Uma Krishnaswami. This book about a girl who moves to India with her family is a great mother-daughter book club read for groups with girls aged 9 to 12. Today, I’m excited to offer an interview with the author, who offers insight into what it’s like to be part of two cultures. 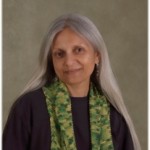 How did you decide you wanted to become a writer?

UK: I was a writer long before I knew it. As a child, I wrote for fun, made up stories and scribbled them down. Sometimes I’d try to gather the neighbor’s kids (and dog) to act out my stories for an audience. They were an unwilling cast and I soon gave up on that. Later I wrote poems and short stories and mailed them off to magazines–and it still never occurred to me to think of myself as a writer! Not even publication in a children’s magazine did that. I think in part that was because all the books I read were by English writers, and you know, many of them were dead. So it never occurred to me that I could be one, or actually was one already. I’m pretty sure I believed that people like me could not be writers. When I grew up I tried out other careers, and nothing ever seemed to fit. I was a social worker, then a rehabilitation counselor, then I managed a university grant in a teacher training program. It all felt like play-acting to me, as if I were auditioning for careers and trying to find out what I really needed to do with my life. By that time I was married, and living in Maryland with my husband. When our son was born, I began to want to write again. That’s when I came home to children’s books.

You’ve written several books for young readers. What do you like about writing for children?

UK: Children are an amazing audience. To start with, they come fresh to the whole thing. It’s all new to them, this reading business–sometimes challenging, sometimes a discovery. Life is that way too when you’re young. I do believe that children have instincts about story that are hard-wired–think about the first time a toddler gets a joke, for instance. That’s an understanding of story kicking in. It’s why I love writing for children, because it pushes me to reach for those first places of awakening and transition in myself.

I know you were born in India. Do you bring some of your own childhood experiences into the narrative when you write about that country?

UK: Definitely. The house that Dini and her family rent in India, in The Grand Plan to Fix Everything, is a real house named Sunny Villa that I once lived in. What else? When I was out walking once, I had a monkey snatch a snack from my hand. That was in a hill town in a different part of India from Swapnagiri, the town in the book, but the close-up look at unruly monkeys came right out of that experience. In a way Dini’s passion for Bollywood movies parallels my passion for books. I used to write fan letters–to authors. I heard back from P.G. Wodehouse, whose books I discovered as a teenager and loved. I still have that letter.

I remember reading about a study once where they looked at memories of childhood. It turns out that artists and writers remember their own childhoods more clearly than people in other occupations. And they remember them with less sentimentality than most people, which is interesting. Children are us, after all, and we grownups still carry those young selves within us, sort of like backup copies of ourselves at various ages. In a way, writing for young readers connects me with all those versions of my own younger self.

Do you find it difficult to live so far away from the place you were born?

UK: Yes, but it also makes it possible for me to live simultaneously in two worlds, which is an incredible experience. I have learned so much from both the places I get to call home. I wrote a poem about that once titled “Lifeline” that Cicada magazine published. Funny aside: They got an artist who has the same name as me, Uma Krishnaswamy (only notice she spells Krishnaswami with a y at the end?) to illustrate it. We’ve since done a book together as well. Life is so strange. You can’t make up stuff like that.

Are their particular things you do to help keep your cultural roots alive?

UK: I travel to India quite regularly, and with the Internet and Skype I can connect with family and friends there almost on a daily basis. So I can truly call two places home, much as Dini in the book learns to do. I cook Indian food at home. I listen to a wide range of music from India. I’m surrounded by objects and art from India in my home. I don’t think I need to make a special effort. It’s just who I am.

What are some of the biggest misperceptions you see Americans have about India?

UK: I think it’s natural for all human beings to try to think of places and people in ways that we can understand, so we tend to use a kind of mental shorthand of whatever knowledge we already have. So if you’ve heard of Gandhi, and that’s all you know about India, then that image is going to be India for you. Or elephants, or poor people, or big temples, or spicy food, or whatever. But India is a huge country and it’s all those things and much, much more. The bigger problem I have is when people think of India and other developing countries as being frozen in time, so that everything written about them has a long ago and faraway feel.

Do you think your writing helps to change those misperceptions?

UK: I think that’s one of the things that led me to write The Grand Plan and my picture book, Monsoon. I wanted to show India in the here and now. Of course I think maybe outsourcing is now replacing tigers and maharajahs as a stereotype. That has its own issues because it’s still only one snapshot of a very complicated place. I have a whole page on this subject on my web site, with reference to common errors I find in books about India: http://www.umakrishnaswami.com/common-errors. I once had a reviewer complain about the setting in my novel, Naming Maya. That was puzzling, until it occurred to me that maybe she was expecting something more along the lines of, well, Jungle Book.

In The Grand Plan to Fix Everything, Dini and her friend Maddie love to watch Bollywood movies. Is that something you enjoy doing too?

UK: I didn’t watch too many of them growing up, but the music was everywhere, so I knew all the songs. I didn’t have to try, they were just there, blaring out from tea-shops and  street corners. I did watch several Bollywood movies while I was writing the book, just to get the mood.

Do you know anyone like Priya, who can make all kinds of imitating noises?

UK: No. I made that part up completely. I was trying to make Priya come to life–she was grumpy, and that can be unappealing, so I was looking for some trait that she might have that could be developed. I began to think of how unlike myself I could make her, of things I could and couldn’t do. I can sing, but I can’t whistle to save my life. So I made her whistle. That turned into bird calls, and then it grew into all kinds of sounds so now she’s a one-girl audio department. Wish I could do all that!

UK: Thank you for your interest in The Grand Plan to Fix Everything. I love the idea of mothers and daughters talking about books; it seems so natural, somehow. I can see Dini and her mom in one. Thanks again!