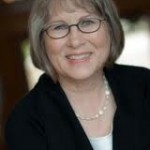 What attracted me first to the story of Great-aunt Clara and Great-grandmother Helga was the astonishing bravado of it: A mother and daughter dared to walk by themselves nearly coast to coast in 1896, meeting the whole range of late-Victorian society from hobos to the next president of the United States, and relying only on each other and the kindness of strangers to survive from day to day.  They carried only what would fit in small satchels, not even a change of clothes, but of course finding room for a stove-heated curling iron.

Seventeen years ago, I started to write, but received rejection after rejection over the next thirteen years.  Finally, Jennifer Wingertzahn, an editor at Clarion who had rejected me a few years before identified my problem and jump-started my imagination on a solution.  I had written an episodic adventure story, with narrow escapes from flash flood, blizzard, outlaw attack, days of being lost without food or water in the Snake River Lava Fields—all based on brief newspaper accounts.

She suggested that Clara and Helga’s story was not just an adventure story, however.  At its heart, it was a mother-daughter story, and each adventure should not only entertain, but highlight the differences in personality between shy and  steady Clara and her more outgoing, suffragist  mother.

At first, I groaned.  Jennifer was asking me to get into the minds and hearts of real people who were no longer alive to be interviewed.  I’d have to make stuff up, and for a librarian who had spent a career in search of facts, that would be hard.  What’s more, wasn’t it arrogant of me to ascribe thoughts and feelings to real people who weren’t here to defend themselves against misrepresentations I might make?

I finally thought of a way to tackle my editor’s request.  For a whole year I gave up reading all contemporary novels and read only books Clara would have read—from classics for school to dime-novels that might have passed from hand to hand among young people.  I put on white gloves at the University of Washington Library to turn the brittle pages of magazines from the 1890’s to get a sense of what issues were on women’s minds.  I read biographies and diaries of women of the time and histories of the suffrage movement.

After that year of immersion in the 1890’s, I was ready to revise yet again.  By then I had decided that Clara and Helga were more than Clara and Helga Estby.  They were prototypes of the emerging New Woman, on the leading edge of social change, daring to do what men—and most women—thought was impossible.  By being so heroic, they surrendered themselves to the mythmakers and I became one of them in The Year We Were Famous.

My editor had sent me back to the revision cave to find the heart of the story.  According to the starred review in Publishers Weekly, after seventeen years and twenty-nine rejections, I had found it at last.  The review read: “The journey in itself is amazing, but Dagg’s tender portrayal of a mother and daughter who learn to appreciate and forgive each other makes it unforgettable.”

Because of the way their trip ended, their own records were destroyed and they never wrote the book they had intended to publish.  One hundred and fifteen years later, I took up the challenge to tell their story for them.  I hope Great-aunt Clara and Great-grandmother Helga approve.