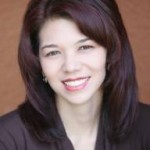 Kristina McMorris lives in the Pacific Northwest with her husband and two sons. She has garnered more than twenty national literary awards since writing her first novel, Letters from Home. A graduate of Pepperdine University, she spent twelve years hosting weekly television shows, including an Emmy® Award-winning television show at age nine. Prior to her literary career, she was the owner of a wedding/event planning business and public relations director of an international conglomerate. Yesterday, I reviewed her book, Letters from Home. Today, she’s here to answer a few questions for readers at Mother Daughter Book Club.com.

How did you decide to become an author?

KM: Honestly, aside from being a PR and business writer, I had no aspirations of pursuing a literary carer. It was only because of a Christmas project that I decided to try my hand at a novel.

You see, for a family holiday gift several years ago, I was self-publishing a cookbook featuring recipes my grandmother had collected and created over decades. While interviewing her for the biographical section, she began to talk about her courtship with my late grandfather. That’s when I discovered, much to my amazement, that they had dated only twice before tying the knot, as their relationship had developed almost entirely through an exchange of letters during World War II. Grandma Jean then retrieved from her closet a gorgeous stack of letters, each page full of the love and hope that had helped carry them through an uncertain time.

After leaving her house, I continued to think about those letters, and wondered how different their relationship might have been if their correspondence had been anything less than truthful. This thought soon became the core idea of Letters From Home.

What made you want to write about the World War II era?

KM: A literary agent once asked me, “Why World War II? Why can’t this be a contemporary story?” In my opinion, today’s instant and convenient communication through emailing and texting generally doesn’t offer the same significance that letters did in the 1940s. Wartime intensified emotions and passions. With the nation’s future hanging in the balance, the setting offers endless opportunities for conflicts of the heart, as well as on the battlefield. Plus, who doesn’t love the music and fashion of that era?

What kind of research did you conduct to make sure the details felt right for the time period?

KM: Though logic should have warned me, I had no inkling just how overwhelming the research could be for WWII. By the time I figured out what I was in for, it was too late to turn back. So I charged after it instead, and I’m very grateful for what I gained along the way. I read textbooks and memoirs, watched documentaries and films. I befriended docents, as well as archivists, who were willing to flag my manuscript for errors. And best of all, I interviewed WWII vets and even rode in a B-17 bomber! Not a bad day at work.  🙂

You tell the story through the personal thoughts of several different characters. Was it difficult for you to be true to each of their personalities as you went along?

KM: When first writing the story, and still developing the characters, I really had to make a conscious effort to differentiate among the three main women, such as their speech patterns, thoughts, and viewpoints. Once I had a clearer picture of who they were, the task became much easier. As for writing the male characters, for some strange reason, their scenes flow right out of me. I often joke that I must have been a GI in my past life.

There’s obviously a big difference between how military personnel communicate with their loved ones at home in today’s world than they did back in the 1940s. What do you see as the advantages and disadvantages of delayed communications?

KM: When it came to WWII, I can’t imagine the wait people had to endure between letters. The absence of a new post could easily swell worries that a beloved serviceman or servicewoman wasn’t returning home. But once a letter did arrive, as my grandmother confirms, the feeling was joyous. She would read those pages over and over again, and, of course, share them with her friends. So although today’s communication speed offers many advantages, to me, little can surpass the treasures held in the pages upon which my grandfather poured his heart.

I noticed that some of the author’s proceeds of each book sale go to United Through Reading.org. What can you tell us about this organization and why you chose to promote it?

KM: United Through Reading is an incredible nonprofit organization that video records deployed U.S. military personnel reading bedtime stories for their children. Not only is it a wonderful cause, but one that promotes literacy and, like in my story, unites loved ones separated by tours of duty. I couldn’t ask for a better fit!

KM: I absolutely love the concept behind your site. I think it’s so important to bring generations together, and I truly hope my novel helps add to that effort. Please visit my website at www.KristinaMcMorris.com for special features designed for reading groups, including 1940s recipes and trivia quizzes. There’s also a discussion guide that explores the similar challenges of women back then and today, with a struggle between motherhood and career.

If you’d like me to visit with your book club in person or via phone/Skype, be sure to contact me!