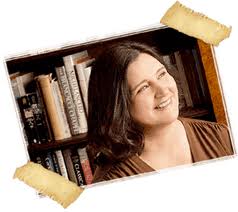 Yesterday I wrote a review of Prisoners in the Palace: How Princess Victoria Became Queen with the Help of Her Maid, a Reporter, and a Scoundrel, a young adult historical fiction novel that I liked a lot. Today, I’m happy to feature an interview with the author, Michaela MacColl. Prisoners in the Palace is MacColl’s first novel, and I certainly hope it won’t be her last.

MM: I remember doing career day at my high school. We all had to bring someone in to class who would talk about their job. A friend of my mother was a writer of middle grade books. She came in and I remember thinking… “this is the only job I can see myself doing…” Unfortunately, I lost track of that initial, spot-on impulse. I didn’t come back to writing until my late ‘30’s. I was traveling with my young children in Tuscany. I wanted to help them connect stories of real people with the places we were seeing… That’s how I started.

What sparked your interest in history?

MM: For better or worse, I’ve never found the present as compelling as the past. I devoured historical fiction when I was a kid, in particular historical mysteries. Everything seemed so much more fun if there was a monk’s robe or a corset (not in the same scene of course!)

A lot is written about Victoria as queen. Why did you want to write about her before she was crowned?

MM: I think perhaps you answered the question. Very little is written about teenage Victoria. This is true partly because not very much was happening to her in the public arena but also because we tend to neglect the stories of children. I think we do so at our peril—it’s when we are children that we develop the strengths and weaknesses that will define our adult lives. I drew a portrait of a Victoria who is a little shallow, a lot spoiled and supremely unaware of the consequences of her actions. This is not meant to disrespect Victoria. She is the result of her upbringing. It is a testament to her underlying character and will that she changes during Prisoners in the Palace. She learns to care about people other than herself.

Prisoners in the Palace includes excerpts from real entries in Victoria’s diary and other historical documents. How long did you spend researching details for your novel?

MM: You never really stop! For this blog tour and for every school presentation, I’m always looking up something. I know that I am often a reader’s first introduction to Victoria—I take this role very seriously. I must get the details right. I started with some of the very excellent biographies of Victoria. She’s one of the most heavily biographed women in the world—so I had a lot to choose from. Then I dig deeper into original sources, which were plentiful. I have 60 years worth of Victoria’s diaries and many of her letters as well. But I also needed to learn about the lives of servants in Victorian times, the architecture and layout of Kensington Palace, how broadsheets were printed….. I could go on!

Did you have trouble deciding which real facts to write into the story and which to leave out?

MM: There are always details you want to throw in. I had some wonderful scenes in the Orangerie—a very odd building behind Kensington Palace that was used for garden parties. You can get a proper English tea there now. After I visited (and once again wondered at the popularity of cucumber sandwiches!), I was eager to write a scene there. I did and I loved it…. But it didn’t really forward my plot, so I left it out.

I also left out many of Victoria’s uncles. They were very colorful and one of them was suspected of murdering his valet, not to mention plotting to overthrow the King of England… but again, they weren’t essential to the plot. It was hard letting go of them, but I feel that the book is overflowing as it is!

How did you decide to tell Victoria’s story from a maid’s point of view?

MM: Imagine a book told from Victoria’s point of view… She can’t leave Kensington Palace without permission. She is never alone. And ultimately, nothing can really happen to her. Every reader, even those most disinterested in history, knows that Victoria becomes Queen. There’s no suspense there.

But a maid? Servants occupy such an interesting place in the story of the royal family. They are always there, but nothing is known about them. They are essentially invisible. So I started with that and made my maid, Liza, a spy.

Liza has to walk a fine line between being honest with Victoria while also showing proper respect. Do you think Victoria had someone in real life willing to help her learn that she was a person as well as a princess?

MM: I doubt it! She had such a confined life and she was surrounded by people who were hyper-aware that she was going to be Queen. Ironically (because Albert doesn’t come off very well in Prisoners in the Palace) I think Albert finally played this role. There’s a great anecdote about Victoria and Albert. They have a huge argument. Albert stomps away and locks himself in his room. Victoria pounds on the door, demanding to be let in the name of the Queen. (Not surprisingly, this is why they were arguing!) He refuses to let her in until it is “Victoria” who asks, not “Her Majesty.” I know he sounds a little pompous—but don’t you think she needed someone to stand up to her?

What did you most enjoy about writing Prisoners in the Palace?

MM: I’m so pleased that I did what I set out to do… write a novel that is Modern and Historical. I think it is accessible and will interest people who aren’t necessarily into history. It was hard – but ultimately the most satisfying part of the book. (I also got to take a wonderful trip to London to do research! That ranks pretty high too!)

Is there any point you think makes a particular good area for book clubs to discuss?

MM: For a mother-daughter book club there is almost too much to discuss! At the core of the novel is the relationship between Victoria and her mother, which has been contaminated by power.

My daughter and her friends were doing a book trailer for the book (it’s not done yet or I would share!). They wrote the script and the first words are “Mom, you’re so unfair!” That was their takeaway from the novel.

Is there anything else you would like to say to readers at Mother Daughter Book Club.com?

MM: I think its amazing that mothers and daughters can read together. The books that I’ve shared with my daughters are part of the fabric of our family. And now they insist I read their favorite books too!

Read my review of Prisoners in the Palace. Visit Michaela MacColl’s website, where you can find out more about this author and her books.