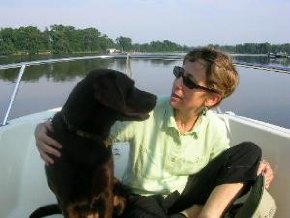 Last month I reviewed Debbie’s wonderful book, The Year of Goodbyes, which was about her mother’s last year in Nazi Germany before the family left for the U.S. The book revolves around entries in Jutta’s poesiealbum and her diary. I really loved the simple way the story came to life through the thing’s Jutta’s friends said to her and what she wrote in her own journal. This month, I was able to ask Levy a few questions about the book, and her answers help me like it even more! Read on to see what she has to say.

Why did you decide to write this story of your mother’s last year in Germany before her family fled to the U.S. from Nazi Germany?

DL: I thought my mother’s story illuminated not only the history of the era but also a universal experience (unfortunately) that readers young and old would find compelling and worth knowing—living as a member of a scorned group, clinging to normalcy in the face of a crazy world, wanting desperately both to flee and to stay in the place that is your home but also your oppressor.

Another why: I’ve often heard people say, with respect to Jews who were caught in the maw of Nazi Germany’s terror and the Holocaust, Well, why didn’t they just leave?  Why did they stay and let this happen to them? As if something like the Holocaust could be predicted or even imagined, as if the lives these families had in Germany and the countries overrun by Germany were trivial, easy to leave behind. They were not, and I wanted to convey that.

Had you heard many of the stories from that time while you were growing up?

DL: When I was growing up in the 1960s and early 1970s, there was little talk in our home about my mother’s childhood in Nazi Germany.  I would say that my mother attempted to erase her German childhood; if you met her, you would certainly not think she was from any place other than East Coast, U.S.A.  (She doesn’t have even the slightest German accent).

Still, some things emerged, even when I was still a girl. I came to know of her great love of napoleon pastry (!), which is mentioned in the book. I came to know of her almost visceral aversion to certain brands of German automobiles—they reminded her of cars that brought Nazi soldiers and police to her neighborhood. I knew she adored her father, and loved their father-daughter time together. I knew that her father moved heaven and earth to get his little family out of Germany.

What about the poesiealbum? Had you seen that while you were growing up and talked to your mother about it?

DL: Again, when I was growing up—no, we did not talk about it. If I happened to see it, I did not get to examine it, much less appreciate it. It wasn’t until I was in my twenties that my mother showed me her diary. The poesiealbum came even later than that.

How was it collaborating with translators and how did you find the people you worked with?

DL: I found my main German translator through the American Association of Translators. She actually knew about the tradition of poesiealbums from her German mother, who still lives in Germany. (Although my mother and her friends were Jewish, the poesiealbum tradition wasn’t a Jewish thing; it was a European thing.) As a prose translator, though, she didn’t feel comfortable attempting to translate the poesiealbum entries as poems. This was fine with me, as I wanted, to begin with, simply to have them rendered into English without the overlay of trying to insert rhythms or rhymes to reflect the original German. I took her basic translations, as well as information she provided about where the German rhymed and about German idioms, and reworked where appropriate to give a greater sense of the original—such as the presence of rhyme or of playfulness, for example.

Then I took this work and ran large portions of it by at least two other German speakers—one, a colleague of my husband, the other, one of my mother’s surviving childhood friends from Germany. The poesiealbum also includes entries in Polish and French, and I relied on friends and friends of friends for help with translation.

So as you can see, the translations were a gradual process.  This is why, as I mentioned to you, I felt like I was watching images emerge from the developer tray in a photography darkroom.  Over time, the sense of the words became clear and, it seemed to me, my mother’s friends and relatives revealed parts of themselves through what they chose to write in my mother’s poesiealbum.

How did your mother feel about her poesiealbum and diary becoming a book?

DL: I think she feels a complicated mixture of happiness, sorrow, embarrassment, humility, and gratefulness.  Happiness for me, because she knows that telling the story mattered to me.  Sorrow for the friends and relatives who didn’t survive the Holocaust—and whom she has been called upon to think about again and again during my repeated and probing interviews of her.  Embarrassment, as in—who am I, to have a book published about me?  Humility, which accompanies the embarrassment.  And gratefulness, simply because she is here—she did escape Nazi Germany all those years ago.

What did you find to be the most rewarding part of working on this project?

DL: The book gave me the opportunity to spend a lot of time with my mother.  We took two overnight train trips—we both love trains—during my research and drafting stages, which gave us long, uninterrupted hours of conversation about her past.  That was very rewarding.

What was the most difficult aspect of it?

DL: The most difficult aspect was investigating what happened to the people of my mother’s poesiealbum. And by “difficult,” I mean both exceedingly sad, as well as challenging. Sad: Of the 30 people who make an appearance in the book, half were killed in the Holocaust. Challenging:  There is no one-stop resource that a researcher can go to for definitive information on people who were killed in, or survived, the Holocaust, although databases maintained by Yad Vashem (the Holocaust research center and museum in Jerusalem) and the U.S. Holocaust Memorial Museum (in Washington, D.C.) are extremely useful.

Did anything surprise you?

DL: Finding out that there is a street in Yerres, France (outside of Paris), named Rue Guy Gotthelf, after my mother’s cousin, who wrote a beautiful entry in her poesiealbum—that blew me away.

What do you hope readers will feel after reading The Year of Goodbyes?

DL: I hope they’ll feel a kinship with the story’s girls, even though they lived a long time ago in another country. I hope they’ll think about the consequences of intolerance and racial hatred.  (Remember, the Nazis viewed Jews as a separate and inferior “race”—their ideology of hatred wasn’t simply religious intolerance.) I hope they’ll be cheered by the loveliness of friendship. I hope they’ll be as taken with the emotional power of the handwriting reproduced in the book as I was, and that it will remind them that every victim of tragedy and every target of oppression is a person with thoughts, hopes—and a distinct handwriting.