Yesterday I posted a review with a giveaway of Brothers of the Buffalo: A Novel of the Red River War (leave a comment at the post for your chance to win a copy). Today, I am featuring an interview with the author, Joseph Bruchac. 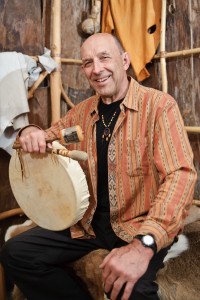 Joseph Bruchac is coauthor of The Keepers of the Earth series, and he is an internationally acclaimed Native American storyteller and writer who has authored more than 100 books of fiction, nonfiction, and poetry for adults and children. Bruchac’s work often reflects his Native American ancestry and his more than 50 years of dedication to traditional storytelling, with a strong emphasis on First Nations history. He also has a lifelong interest in West African culture, history, and literature with a focus on the nation of Ghana where he spent three years as a teacher in the 1970s.

Your new YA novel, Brothers of the Buffalo, is a historical fiction tale of the Red River War. What captivated you about this particular moment in American history?

JB: Although the so-called “Indian Wars” would not conclude until two decades later when the last of the Chiricahua Apaches surrendered, the Red River War marks the beginning of the end insofar as armed resistance to the United States government goes. It was the last major coalition of different tribes put together to resist militarily–like King Phillip, Pontiac and Tecumseh did in previous centuries. The fact that it was largely done to attempt to save the American bison (and the way of life of the Plains nations) from being destroyed makes it even more memorable. Another part of this story, which has long fascinated me, is that on the United States side a very large role was played by the 10th Cavalry, made up entirely of African American soldiers (with the exception of their white officers), some of them former slaves and veterans of the American Civil War. However, what I think drew me the most to this war is that it led, quite directly, to the creation of the American Indian Boarding Schools that would deeply impact the lives of virtually all Native American communities, an impact still being felt to this day. Lieutenant Richard Henry Pratt, an officer of the 10th and the man placed in charge of the Native American POWs sent to Florida after the Red River War would experiment with “civilizing” those men and go on to found the Carlisle Indian School which had the stated objective of “killing the Indian and saving the man,” nothing less than cultural genocide.

Brothers of the Buffalo is written about two markedly different young men, Wolf and Wash. What inspired you to write from both perspectives and did you find it challenging? Did you have a favorite character?

JB: I chose to approach the story from those different perspectives because I felt that the complexity of this story deserved more than one POV. One of the oldest sayings in a number of Native American communities is that we have two ears on either side of our head so that we can hear more than one side of every story. I believed that a reader would understand the story better by having more than one voice to hear and that it would provide more depth to the history being told. What you see often depends on where you stand. I was given a great deal of help in writing this story from any number of directions–people in the Cheyenne community, for example, such as my friend for more than 4 decades Lance Henson. I also was fortunate enough to have been part of the American Civil Rights movement in the 60s, to have lived in Ghana, West Africa as a teacher for three years, to have had the privilege of teaching African American and African literature and to count more people than I can easily count in Africa and the African diaspora as close, dear friends. All that experience did not make it easy to inhabit such different characters, but it did make it easier. I’d also been researching and writing about parts of this story or events before and after that tie into it–such as the Civil War and the Carlisle Indian school–for decades before I began to work on this manuscript. Insofar as a favorite character goes, I guess I feel so strongly about both my main narrators that it is impossible to say that one of them was my favorite. But beyond those two young men, I think the person I found most interesting and most fascinating in this story–is Richard Henry Pratt–even though I disagree DEEPLY with the conclusions he drew about how to deal with the “Indian Problem.”

Brothers of the Buffalo is infused with both first-person letters from Wash and songs and proverbs from Native American culture. Could you tell us what you hope readers will take away from both?

JB: My idea in including the songs and proverbs was to offer greater depth and more insight into both characters and the cultures to which they belong. In Wash’s case it is both African and African American. When I lived in West Africa I was often told that every human being is not just part of a family he or she IS their family. And I have also often been told by Native American elders that community, oral tradition, and family make us who we are. The use of letters is a great way to both tell a story and provide insight into the persons writing those letters, both in what they say and what they do not say as it is projected against the larger canvas of the overall story. In addition, I think those stories from the backgrounds of both my main characters are great stories, worth reading on their own, proof of the sophistication and intellectual complexity of cultures (African, Native, African American) that were usually portrayed as innocent, uncultured, uncivilized and ignorant in the 19th century when this story takes place–and, sadly, still sometimes pictured that way in the 20th and even 21st centuries.

What motivates you to write for young adults?

JB: I began as a poet, writing for adults, with my first book in 1971. I still write and publish poetry, but when my two sons were born in the 70s I began to write down the stories I told them, largely traditional tales that were lessons stories–enjoyable to hear, but filled with meaning. I was delighted, not just by the way my books were received, but by the effect I saw them having on young people. I then began writing for middle grade and YA readers and had a similar experience. I believe that some of the best writing being done today is being done for young adult readers. You honestly do not have to hold anything back when writing for them. They are sophisticated enough to understand and appreciate complexity, but also very much in need of good literature. (At this point I could break into a long tribute to reading and what it does for us, young and old, but I shall restrain myself.) I still write for all audiences, from the very young to the adult reader. But, more and more, I am finding the deepest satisfaction in creating books for YA audiences.

What are you hoping readers will take away from Brothers of the Buffalo as a whole?

JB: One of my hopes is that they will better understand a period of history that is often neglected and see that history through very different eyes–the eyes of a young Cheyenne fighting for his family and culture, the eyes of a young African American soldier who is just as deeply committed to family and freedom as is his Native counterpart. In the end (an end of the story that is not at all fantastic but reflective of documented history)  the two of them physically arrive at the same place–seeing each other not as enemies, but as equally human. I hope my readers may arrive at a similar place, perhaps with a broader perspective on some of the issues faced by my two heroes–issues of race, class, Native American and human rights still being played out today.