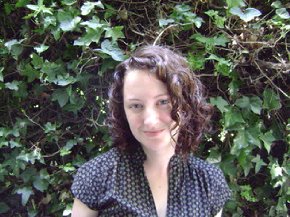 Katie Williams, author of The Space Between Trees

Katie Williams is the author of The Space Between Trees, a book for young adult audiences that I highly recommend for mother-daughter book clubs with girls aged 14 and up. (See my review.) In her novel, Evie and her mother don’t often see eye-to-eye, and they seem to have forgotten how to communicate with each other, if they ever knew. Here, Williams gives her take on parents in young adult fiction, and why they are often portrayed as absent in some way.

This is Katie Williams stopping in at the Mother Daughter Book Club as part of my blog tour to spread word about my debut novel, The Space Between Trees. The Space Between Trees follows observant loner Evie who wishes her life were as interesting as the lies she tells the shy girls at her high school. But when Evie stumbles on the discovery of her childhood friend’s body, her exaggerations snare her in the aftermath of a murder, binding her to the dead girls’ loved ones and pulling her closer to difficult truths about the world and herself.

Since I’m here visiting the Mother Daughter Book Club, I thought it’d be interesting to talk about how YA books characterize parents. I’m sure you’ve noticed that all too often the parents don’t come off very well. When they aren’t workaholics, they’re abusive; when they aren’t abusive, they’re hopelessly clueless; when they aren’t absent or violent or ignorant, they’re probably secretly evil so watch out! In fact, sometimes it seems that the only good YA parents are the dead ones, no more than kindly memories called up by the plucky orphan child.

So why do YA authors write such abominable parents? Were we all raised by villains? Well, perhaps a sad few of us were, but I’d imagine that most of us had caring parents. I know I did. So what gives? Well, the story gives. Or rather, the story demands.

The story demands complicated characters, and while some of the more negative fictional parents are hardly nuanced, many of the checked-out or driven parents are attempts by the author to build layered characters with their own blindspots, fears, and desires. Take, for instance, Laurie Halse Anderson’s perfectionist mother in Wintergirls or even Philip Pullman’s battling mother and father in The Golden Compass. (Okay, I wouldn’t hire that last duo to babysit!)

The YA story also demands that the protagonist strike out on her own. YA stories are, most often, stories of growing up. (As are most adult stories, come to think of it.) Sometimes this self-sufficiency can be achieved while still under the parents’ roof. Other times, the striking out is literal, and the protagonist must go on a physical journey to mirror her developmental journey. This is a classic YA storytelling trick, especially frequent in adventure or fantasy stories, from The Lion, the Witch, and the Wardrobe to Graceling.

Finally, the YA story demands that it be on the young person’s side. Yes, this is unfair, but so are teenagers. Hey, so are we all when it comes to our own biased worldviews! As my own patient mother (and I’m sure many of you readers) can attest, it’s natural for a teenage girl to create distance from her parents, in order to work out her own identity. And if you aren’t creating this distance with a talking animal companion and the wide road ahead, you might be creating it with emotion and attitude. If fictional parents are shown to be clueless, ridiculous, or unfair, it might be because the protagonist needs to see them this way in order to see herself as something different.

It strikes me that this might be an apology in guest-post form. For much of The Space Between Trees, my protagonist, Evie, sees her mother as shallow, silly, and incapable of understanding her. And though the mother-daughter relationship isn’t at the center of my novel, it was important to me that the connection between these two characters feel authentic and that it evolve. By the end of the novel, Evie has begun to realize that no matter their foibles or faults, she and her mother love each other, and that that is worth quite a lot.

You can read more about The Space Between Trees, including the first chapter, at my website, www.katiewilliamsbooks.com.