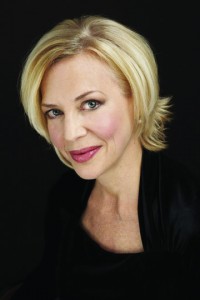 Kathleen Kent is the author of The Heretic’s Daughter, a story of the Carrier family and the Salem Witch Trials (see my review). She grew up in Dallas before attending the University of Texas at Austin.  After college she moved to New York where she worked in commodities and then as a contractor for the U.S. Department of Defense, traveling extensively in the Former Soviet Union.

In 2000 she returned with her family to Dallas and began writing the book she had always wanted to write; the story of Martha Carrier, the author’s grandmother back 9 generations, who was hanged as a witch in Salem in 1692. Her first novel, The Heretic’s Daughter, is based in part on those family stories, passed down through many generations and has been a New York Times bestselling novel, both in hardcover and in paperback.  Published in over a dozen countries, it was the recipient of the 2008 David J. Langum award for American historical fiction.  Ms. Kent’s second novel, The Wolves of Andover, about the life of Thomas Carrier, will be published by Little Brown in November of 2010.

I caught up to Kent by email, where she happily answered a few questions for Mother Daughter Book Club.com.

I understand you got the idea for The Heretic’s Daughter from family stories about Martha Carrier. How did you decide to turn those stories into a novel?

I first remember hearing about Martha Carrier and the Carrier family legends from my grandmother. She told such wonderful stories, not only about the Salem witch trials, but about the hardships and personal courage of Martha and her husband Thomas. She was the one who said, in answer to my question of whether or not Martha was truly witch, “there are no such things as witches, merely ferocious women!” I had always had in mind to write a fictionalized version of these events, but ended up working for twenty years in New York, building a career in business. In 2000, when I moved back to my childhood home of Dallas, I made a conscious decision to begin the research and writing of the book. It took five years of hard research and many drafts of the novel before I felt confident enough to send it to publishers.

How difficult was it for you to imagine the details of life for these people, your ancestors who became your characters?

When I first began researching the book, I felt very strongly that for the story to feel authentic, it needed to be filled with accurate accounts of day to day life; how these settlers dressed, farmed, cared for their families, worshipped. I spent countless hours pouring over documents, sermons and letters of the day to glean details of what life was like in 17th century New England. The best historical fiction, I believe, is anchored in good historical research. The characters were drawn not only from the stories that my grandmother used to tell—she was always gleeful about how outspoken Martha Carrier was—but also from relatives in my own immediate family. The story of conflict between Sarah and her mother, Martha, were drawn, in part, to my own struggles to find self-identity. And finally, I was very fortunate to have access to the verbatim transcripts of some of the court proceedings. A lot of the state of mind and character of the accused can be extracted from the narrative of the actual trials.

What kind of research did you do to fill in the other historical information you needed to bring your story to life?

I did a lot of conventional research in books and on-line as there is a wealth of fiction and non-fiction information of the time in print, but I also traveled to Massachusetts and Connecticut to visit historical societies, genealogical societies and even senior citizen homes to talk to the local town historians. Standing in the original buildings and homes that still exist gave me a visceral sense of the scale and harshness of the times, and I looked for lesser known (and sometimes very dry) accounts of agrarian life in the 17th century. Some of the best windows into the times came from reading the letters of the settlers, although most of the accounts were from the male perspective of Puritan life.

Did you discover anything surprising while you were conducting research?

It came as a surprise that close to 150 men,women and children under the age of 17 were arrested, some of whom were relatively privileged and influential. When we study the witch trials in school, we usually tend to believe that only a hand full of people were accused and hanged.  So many theories have been offered to explain the intensity of the hysteria—ergot poisoning, or even that there really was witchcraft practiced—but I was surprised to learn that almost every accusing girl had been related to, or closely associated with, someone who had been captured or killed by Indians. In the Puritan mind the native Americans were not devils figuratively, but were in essence devils personified. It gave me a new perspective on the level of fear the settlers experienced waiting for the next raid or attack.

How did you decide to tell the story from Sarah’s point of view, instead of her mother’s?

I had originally planned to write the book from Martha’s point of view, but I quickly realized that once Martha is hanged, that’s the end of her narrative. There was so much that happened after the hangings, so many young people still imprisoned, that I decided it would be more interesting to have the narrator be one of Martha’s children. In reality, four of her five children were arrested, her two oldest sons tortured to compel them to testify against their own mother, and I felt that the story would take on a new, deeper emotional charge if it was told by the young daughter, Sarah.

I also wanted to illustrate the universal, and timeless, theme of the dynamics between mothers and daughters. It usually takes a life-time of living, raising children, marriage, and profound loss, to fully understand the sacrifices that our mothers made for us. I wanted to portray a coming of age story, and the blossoming of  personal wisdom that reminds us daily who we are and where we came from.

What do you particularly find fascinating about the Salem Witch Trials?

There are so many elements of the trials that are interesting, not just from a historical point of view, but which have relevence today; religious tolerance and freedom, the necessity of due process of law, engaging in the greater civilized discuss to prevent abuses of power, especially from fundamentalist groups who seek to repress the weakest members of society, mostly women and children. I think for a long time, quite a few people still wanted to believe that these so-called witches were in fact confederates of the Devil. There is a profound longing for magic in our lives and it’s titillating to think of people with the power to fly on a broomstick, casting magical spells. But with good historical scrutiny comes revelation, and we only have to look back a little ways in more recent history—Bosnia in the 1980’s, Germany in the 1930’s—to see how quickly, even the most “enlightened”, civilization can turn on its own people. We now know that the men and women hanged were victims of greed, vengeful thinking, unreasoning supersitious fear and a misunderstanding of mental illness.

How does this story differ from others told about that time?

It is, at heart, a story of family struggle, courage and survival. The witch trials are an important part of the book, indeed its central theme, but it’s a more personal story about the Carrier family–stories that have been passed down through ten generations. There are little anecdotal tales in the book that come directly from the family, for example the Carrier cow that was fed pumpkins and gave golden milk, that I hoped would give a greater dimension to the characters. A lot of the fictionalized versions of the witch trials center on the trials, without chronicling the events that led up to the hysteria and neighbor turning against neighbor.

What are you working on now?

I am delighted to say that I have completed the prequel to The Heretic’s Daughter which will be released on November 8. Titled The Wolves of Andover, the novel depicts the life of Thomas Carrier, Martha’s husband, and his involvement in the English Civil War and the events leading to the execution of King Charles I of England. Some of his life previous to coming to the colonies was alluded to in the first novel. The contents of the “red diary” will be fully revealed, exposing the intrigue and mayhem of the courts of Charles I and Charles II, and the flight of the regicides to the new world.

One of my greatest joys since publishing The Heretic’s Daughter is knowing that so many women have shared the book with their families, especially with their mothers, daughters, grandmothers, etc. I have spoken to many book groups, and often the most fun are the mother/daughter book clubs where the readers tell their own generational stories. The book has been published in 15 countries, worldwide, and it speaks to the importance of the women bonding together for support and comfort. After all, usually the keepers of the flame of family history are the women.