Today I’m taking part in a blog tour for Maybe a Fox, a book for young readers that explores tragic events, connections between humans and animals, and healing after loss. Please note: the giveaway is closed. Congratulations to Elizabeth on winning.

Check out my review the book. To help you get to know both authors a bit, I am featuring an interview with a twist. The authors ask questions of each other about their ideas for the book. First, let’s take a look at their background info. 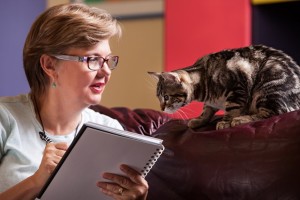 Kathi Appelt is the New York Times best-selling author of more than forty books for children and young adults. Her picture books include Oh My Baby, Little One, illustrated by Jane Dyer, and the Bubba and Beau series, illustrated by Arthur Howard. Her novels for older readers include two National Book Award finalists: The True Blue Scouts of Sugar Man Swamp and The Underneath, which was also a Newbery Honor Book. In addition to writing, Ms. Appelt is on the faculty in the Masters of Creative Writing for Children and Young Adults at Vermont College of Fine Arts. She lives in College Station, Texas. To learn  more, visit Kathi’s website at kathiappelt.com. 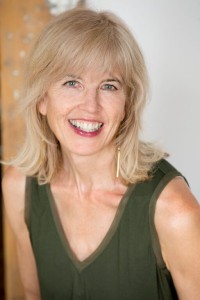 Alison McGhee is the New York Times bestselling author of Someday, as well as Firefly Hollow, Little Boy, So Many Days, Bye-Bye Crib, Always, A Very Brave Witch, and the Bink and Gollie books. Her other children’s books include All Rivers Flow to the Sea, Countdown to Kindergarten, and Snap. Alison is also the author of the Pulitzer Prize–nominated adult novel Shadowbaby, which was also a Today show book club selection. She lives in Minneapolis, Minnesota, and you can visit her at AlisonMcGhee.com.

Now, here’s a not from Kathi and Alison, followed by their interview.

“Thank you for inviting us to discuss our new book, Maybe a Fox, that we co-wrote over the course of several years. We wanted to talk about the role that nature plays in this story, and so we’re interviewing each other.”

Question for Alison: The very genesis of this story appeared in the figure of a small fox, that you found in a lovely poem by Patricia Fargnoli. During the course of the writing I know that you did a lot of research on foxes, but beyond that you seem to have a personal connection to them. Can you talk about that and how it informed your writing of the fox family, specifically Senna?

Alison: Foxes were a part of my rural childhood, but they were always secretive and rarely seen. Many years ago my youngest daughter and I were hiking in a woodland park when we turned a corner and saw a fox pounce on and kill a chipmunk. We were transfixed, by both the quickness of death and how fast a life can end, and partly because we had beheld an animal in its natural state of survival. After that experience I began to see foxes more and more often. Down in the wilds of the Florida Panhandle where I spend a lot of time, for example, and even in the middle of Minneapolis. Foxes are fascinating creatures to me, and when it came time to write our book, little Senna sprang to life in my imagination. I didn’t have to conjure her up; she just appeared.

Question for Kathi: As I recall, you came up with the idea of The Slip, a geologic feature in which a river slips underground for a while before re-emerging farther downstream. Where did that come from and why was it so important to the story?

Kathi: I remember reading a book called Fencing the Sky, by James Galvin, and there was a similar feature in that story. He told it so well that to this day, I have a vivid memory of it. At the same time, I have a friend who is a cave diver. I can’t imagine anything more claustrophobic than being simultaneously underwater and in a cave. However, he told me that these underwater caves have a huge sense of mystery. I imagine that’s because they’re so dark. But it also made me think that they’d be wonderful sources for creating a “mythology.” The idea of such an underwater cave feels rather magical, and even though it’s filled with danger, I think that danger often evokes magic, especially in the natural world where the forces of nature are so much larger than the forces of humans. I also think the idea of having such an old feature in the story gives it a sense of belonging on a continuum. The wildlife—including wild children—will come and go, but the river keeps running.

Question for Alison: You grew up in rural upstate New York, which is very akin to the rural countryside of Vermont. At one time, you told me about cairns. Can you talk about them and also about the idea behind the wish rocks, and why they were so important to the two sisters in the book?

Alison: In both the Adirondacks, where I grew up, and Vermont, where I went to college and live part-time, abandoned and crumbling stone walls thread their way through the woods and fields. They mark boundary lines, former homesteads, and they’re made from the rocks found on the land. I’ve been a hiker all my life, in New England and the Rockies and wherever I find myself, and when I hike up mountains I always look for the cairns—small or large piles of rocks and stones—that hikers who came before me have left. Sometimes they’re left to mark the way, sometimes they’re left as little silent greetings. Rocks used in this way become imbued with power, it seems to me, and with the wishes of those who hold them. It was natural that Sylvie and Jules would throw wish rocks into the river, and after Sylvie died it felt right that the rocks she left behind would hold silent messages for those she loved.

Question for Kathi: Would you talk about the catamount and its role in the story?

Kathi: Sure. The catamount is a ubiquitous figure in Vermont. Sports teams are named after them, grocery stores are named after them, any number of products are named after them. They’re a beloved animal in the woods and hills of Vermont. Closely related to mountain lions or cougars, they’re actually an eastern puma. Even though it’s highly likely that they’re extinct, each year several people claim to spot one. But so far the only evidence of their existence is in grainy photos, rather like those of the Loch Ness Monster. The thing is, like with the Ivory Billed Woodpecker and the Passenger Pigeon, it’s very hard for us to believe that we’ve actually caused the demise of such a beautiful creature, so we embark upon a lot of “magical thinking.” That is, we wish so hard that there’s a catamount out there, we almost have to believe it. In this story, the catamount appears like a shadow. Is it really there? Is it dangerous? The primary thing about it is that its appearance gives Sam, our boy of the story, some hope that life will get better. If a catamount can appear, then other good things can happen too.

Question for Alison: Many of us have our most “spiritual” moments when we are in a natural setting. I know that nature is extremely important to you. For as long as I’ve known you—thirteen years now—you’ve made it a daily ritual to go outdoors, even in the worst of weather. In almost all of your books, nature plays a key role. Can you talk about why it’s so important, especially for young readers?

Alison: The outdoors, woods and mountains especially, are where I find peace and energy. When I hike and walk and run and kayak, insights into questions or problems that are troubling me in my life often appear. My body and my spirit are calmed by solitary time spent outside. In this way, the outdoors is a kind of church to me, a place of unconscious meditation. I think that we all need a way to conjure acceptance and peace within ourselves. As a child and teenager, I often felt lonely, filled with wonder and worry about my place in the world. And even if I didn’t feel as if I fit in elsewhere, I could always feel at home in the woods or on the open road.

Kathi and Alison: Make a wish.